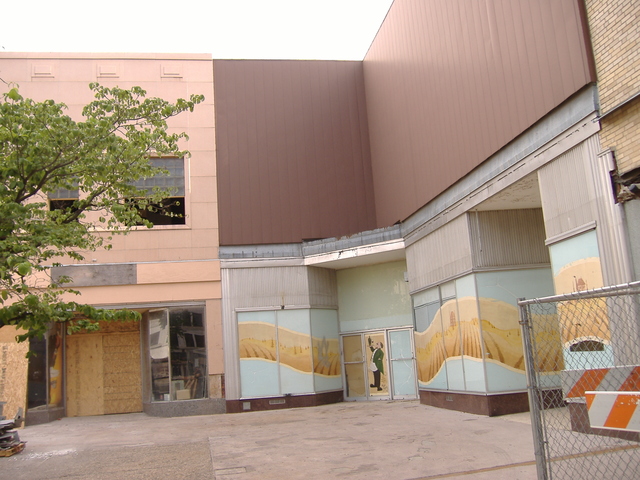 Located in downtown Springfield at 111 Kirby Avenue. The Grand Theater was opened on June 18, 1910. It was closed on April 10, 1930 as a silent cinema. It was wired for sound and reopened as the New Iris Theatre on September 12, 1930. Taken over by the Midwest Theatres circuit it reopened on August 9, 1933 as the Morzark Theatre. It got its name from the location of Springfield, being located in the Missouri Ozarks. It was closed on August 18, 1950.

The Mozark Theater was located in the SW corner of the Public Square. It was torn down in the mid 50s to make way for an expansion of the Newberry’s Dime Store next door. I recall it showing westerns and was very small.

Kirby’s Arcade was demolished ages ago and Google Maps will never find it. It is placing both the Mozark and the nearby Grand Theatre in the countryside near Fair Grove, miles outside Springfield. The nearest we’ll get to a correct address for these two theaters will probably be to place them on Park Central Square. The arcade started at the southwest corner of the square and, as near as I can determine, ran west to South Patton Street.

Judging from the style of the front, I suspect that the Newberry’s store hhardley mentions was probably in the building that now houses the Park Central Branch Library, so the theater was probably in or adjacent to that, tucked into the corner of the square. The Grand, at 127 Kirby Arcade, was probably near the Patton Avenue end of the Arcade.

The Grand Theatre launched likely on a twenty-year lease on June 18,1910 by W.W. Smith with motion pictures on a Mirror Glass Curtain. The nearly 800-seat theatre closed at the end of its lease on April 10, 1930 with Charlie Chaplin in “The Circus” never converting to sound.

On a new twenty-year lease, the venue had been wired for Western Electric sound becoming the New Iris Theatre showing movies. The independent operator’s opening double bill was on September 12, 1930 showing “Tarzan the Tiger” and “Boarder Romance.” The Iris Theatre (dropping New) operated as a discount sub-run house. The theatre appears to have closed with a bill of “Ghost City,” “Vanishing Legion,” and an Oswald, the Lucky Rabbit cartoon.

It was then taken over by Midwest Theatre Circuit out of Tulsa which also ran the Mullikin. Midwest and manager John Brown equipped it with 600 seats and went for a Spanish themed architectural style. It launched on August 9, 1933 with George Raft in “Night After Night” supported by Laurel & Hardy in “Scram” and Burns & Allen in “Your Hat.” The Mozark appears to have gone out of business at the end of its 20-year lease on August 18, 1950 with the double feature of “The Fatal Hour” and “The Shadow Returns.”

Just to be clear, this was never a newsreel movie theatre.