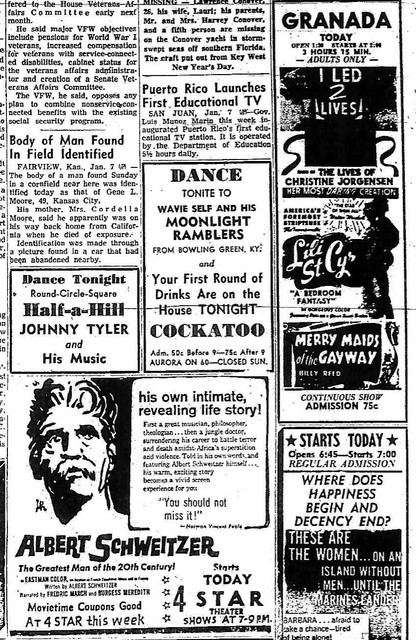 The Granada Theatre opened on January 12, 1937 with Joe E. Brown in “Sons o' Guns”. It was closed on August 10, 1958 with “Hollywood Peep Show”, “Raw Confession of a Nudist” & “Chained for Life”. On September 4, 1959 it reopened as the New Lyric Theatre screening ‘art’ films, but closed a month later. It became a church in 1960. In 1961 it became a concert venue, name Lyric Theatre, it featured County Western music. It closed July 31, 1964 and became a furniture store. It has since been demolished and the site is now a parking lot.

Can’t tell if it still stands or not. There’s a building 1-2 spots over from the Google address that may be it – plain brick wall on the side. Remodeled storefront looks currently vacant. But can’t be sure if that was it or not. At the exact address there’s a vacant lot.

This information is wrong. I attended the opening of the Grenada in 1939 when the Ritz Brothers in “The Three Musketeers” was shown. After that it showed third-run movies for years, plus serials on the weekends. It was open all through the 1950s as far as I know and closed when TV caused many theaters to shut down. You can still see where it was when you see street views of the south side of Commercial Street several blocks east of Boonville, Ave.

The photo above of the empty lot at 408 E. Commercial St. is the correct location for the Granada. Here’s a partial photo of it in the late 1940s: http://php.news-leader.com/beforeafter/?image=50

The Granada Theatre launched on January 12, 1937 with Joe E. Brown in “Sons o' Guns.” It was closed by police on August 10, 158 with a triple feature of “Hollywood Peep Show,” “Raw Confession of a Nudist.” and “Chained for Life.” However, the police allowed all patrons to finish the final showing of “Chained for Life” to avoid having to provide refunds. Dickinson Theatre offered the building for sale “cheap.”

DJ Charles Burton took on the location showing “art” films as the New Lyric Theatre opening September 4, 1959. That lasted one month. The theatre then became a house of worship, the Freedom Temple in 1960. In 1961, it resumed as a live concert venue, the Lyric Theatre, with live country music. it ended operations on July 31, 1964. It became a furniture store before demolition.