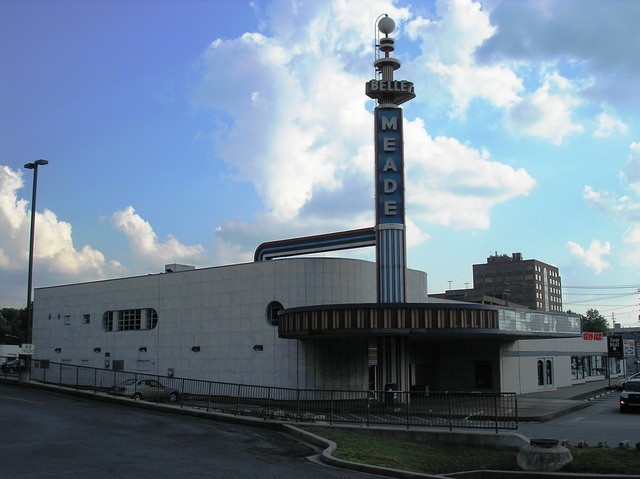 The Belle Meade Theatre opened in May 1, 1940 seating over 1,100. It was operated by Crescent Amusement Co. Seating was later reduced to 800. Martin Theatres took over operations of the theatre in 1961 followed by Carmike Cinemas in 1985. The Belle Meade Theatre closed in February of 1991. The building was later gutted and converted to a book store.

In 2006-7, the auditorium portion of the former theatre was razed. The lobby, facade and marquee will be reused in the development replacing the theatre, a mixed-use retail/residential complex called the Belle Meade Town Center.

When the restoration of Lawrence of Arabia ran in 1988, I was managing the Belleview 4. Carmike signed me out of the theater, and put me as projectionist at the BelleMeade, because I was the only person in Carmike’s organization who had experience running 70MM films. Harry Vickous was the manager at that time and it was a lot of fun working for him.

This is where Pat Boone got launched on his singing career. I recall reading in one of his books that he sang for milkshakes at the Belle Meade when he was younger!

The photos and autograph slabs were returned to the Tennessee State Museum when Bookstar was evicted. They were technically on loan from the museum. They are in storage.

Thanks for the info about the autographed marble slabs from the Belle Meade, tncamper. As long as they weren’t thrown in a dumpster, which I feared. The Belle Meade was definitely the queen of the suburban movie houses. I believe my first visit was to see “Gone With the Wind” in 1961 for the Civil War centennial. I would’ve been about 9. I then saw GWTW again in the awful 1967 “widescreen” release, where they simply cropped the image to fit a wide screen. One screening there, maybe 1989, when the film was restored, the Belle Meade featured a lobby exhibit of props etc. from the movie. I recall a window from the Tara set especially. The last movie I saw at the Belle Meade was the restored “Lawrence of Arabia,” mentioned by Imaxguy above. I sat on the very back row so I could take it all in, also knowing that the theater would soon be closing. Going to a movie there, like the downtown theaters, was an event.

Ads for the three Cinerama titles that played at the theatre when it was a Cinerama theatre – http://incinerama.com/belle.htm

One of my first jobs was here. I absolutely cherish the memory. I remember seeing Return of the Jedi here in 1983 on opening day in 70mm. I actually have home video of the place when it was still open. I will tranfer it to Youtube and post a link here. If I remember correctly, I have close up video of the “wall of fame” with the autographs and pictures of each star when they visited the theatre. If its true and the slabs are in storage, they need to be put on display somewhere. The Belcourt would be a great venue to display the wall of fame again.

short, albeit crappy PQ, video of back in the day at BMT. This was 1987ish https://www.youtube.com/watch?v=uQkLx2joBzk