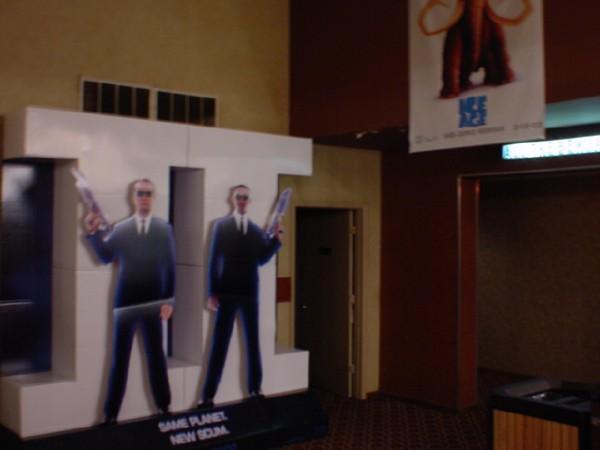 The Brighton Park Twin Cinemas were closed in June 2008.

It’s closed again. The streetside billboard is gone, and it is no longer listed on the Chakeres web site.

The theater may have opened sometime in 1979. My earliest memory of Brighton Park was watching The Empire Strikes Back in 1980. Back then Brighton Park got all the big movies. That was back when Brighton Park Shopping Center was a Indoor Mall, or someones poor attempt at making a indoor mall. From what I remember the original tenants of the mall were Kroger, (which was only accessed from outside) Taylor Drugs, (outside access only) Ace hardware, Game Zone (video game arcade) Brighton Park Cinemas, Kittyhawk Records, several clothing stores which I don’t remember the names of. That’s all I can remember, I seem to remember a hair salon but I am not sure.

At some point in the late 80s the owners of the mall converted the mall into a shopping center with every store having its own outdoor entrance and store front. Since the cinemas was in the very back of the mall, that meant it needed a long barren hallway to get in and out of the cinemas. The BP Cinemas store front was very small just two glass doors, not even wide enough for movie poster cases on the outside. This new design began the decline of the Brighton Park Twin Cinemas. It became lost among the other larger store fronts of the shopping center. And things would never be the same.

A few memories that stick out in 1981 for the re-release of Star Wars I remember we went on family night and the line was almost outside of the mall’s main entrance. We got in line and got almost to the box office when the manager yelled Star Wars sold out. Also in 1982 E.T. played all summer long and into the early fall which I believe was the longest engagement.

Later in life I had the pleasure of being the manager at Brighton Park Cinemas for about 10 years from 1993 to 2003. I tried to breath new life into the theater and had some success changing it into a discount theater and had many sold out showings of lots of the big movies in the 90s. In 1995 we played Forrest Gump for 13 weeks with many sold out showings even after it was released on video.

Seating when I was there was 591, auditorium 1 was 296 and auditorium 2 was 295. The fullest I ever saw both screens was 476. In 1996 we were playing Twister on one screen which was sold out and Independance Day on the other.

I really miss this theater now that its gone, it will always have a special place in my memories.