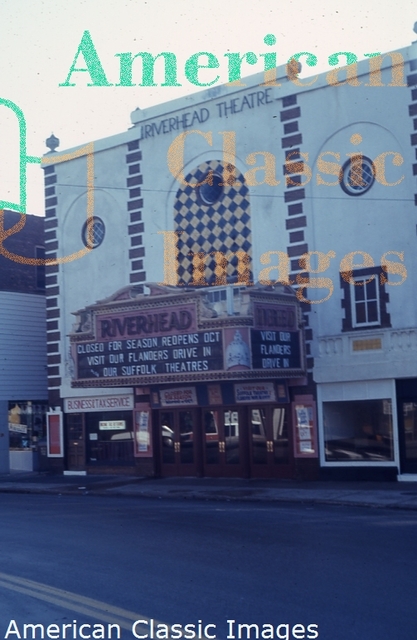 The Capitol Theatre was erected by Robert E. Riley and opened on November 24, 1920. It was one of the finest movie houses in Suffolk County. In 1925 it was renamed Riverhead Theatre. It was remodeled in 1931 to the plans of architect Calvin E. Kiessling. Closed and demolished in the early-1960’s.

She wasn’t the only traffic director on LI. There was an elderly man in a baseball uniform on Rt 25A in Wading River.

The grand opening ad from the County Review of November 19th, 1920 has been uploaded in the photo section for this theatre.

Riley’s Capitol in Riverhead was sold in April, 1925. This was less than a year after they lost their Capitol in Babylon as a result of bankruptcy. The theatre was sold for a reported $100,000 but one of the Riley brothers purchased $20,000 stock in the new company which redecorated the premises and renamed it the Riverhead.

Added a photo around the time of closure.

Upload photo of vintage postcard when it was the Capitol. Mentioned as a link in one of the comments but these links are tenuous. You’ll note that the Capitol had a vertical but no signboard; as Riverhead, the reverse. They also added the Riverhead name to the façade.

Also, re the Riverhead photo, presumably the theater wasn’t air conditioned since they were only going to reopen in October and were referring people to the Suffolk which, and I can vouch for it, was and the nearby Drive In.

Back in the mid 1990’s the late Brother Andrew Corsini who was editor for the Theatre Historical Society wrote to me asking if I had ever heard of a Capitol Theatre in Riverhead, NY. I then began researching it (not an easy task in those days before Google) and, with the help of Wally Broege of the Riverhead Historical Society, discovered quite a bit of interesting information related to the theatre. Articles in the Suffolk Life weekly newspaper chronicled the construction and opening of this lavish little theatre in vivid detail.
Apparently a severe winter delayed some of the construction and it was written that the entire house was built and furnished by local contractors for the exception of the marquee and the special seating located in the orchestra section down front. The pipe organ was a 2 manual 4 rank Robert Morton. The grand opening was delayed a day or so due to a popular fraternal organization having ceremonies scheduled for the original opening date. In the beginning the feature films were supposedly changed on a daily basis and organ concerts were held on Sundays and proved to be very popular. Around the advent of sound the house was sold to Prudential who, in turn, modernized the auditorium by removing the organ and orchestra pit, adding more seating and the necessary sound equipment.
The Robert Morton organ was sold to Lester Little. His mother built a large studio for him on Paradise Point where the organ was installed and eventually enlarged to include more ranks of pipes and 2 more manuals. However, the work was poorly done. The studio also had a recording booth and ample audience seating. He was a member of the Long Island Organ and Piano Society and his studio was frequently used for club get-togethers. As I have been told many well known organists of the day visited and played the organ. Lester enjoyed playing hymns while his lady friend Althea Seavers sang the verses. I confirmed this with Althea many years ago when she was living in upstate New York. When Lester passed away the organ was broken up for parts and the studio and adjoining property is now privately owned.
The theatre’s marquee was added onto more than once until it became a huge over sized monstrosity. It was eventually removed when it was in danger of coming down. The Capitol/Riverhead theatre was torn down in the early 1960’s and the lot where I believe it stood on E. Main Street is still vacant and is next to the Long Island Science Center. The street numbers in that section of E. Main St are very confusing and, in my opinion, make no sense.

Extensive alterations were made to the Riverhead Theatre in 1931, the house reopening on February 5 as advertised in that day’s issue of The County Review (PDF here.) The architect for the remodeling was Calvin Kiessling, who had offices in New York City and in New Caanan, Connecticut.

Uploaded a photo of Main Street from the 1960s with the marquee of the Riverhead appearing on the right.