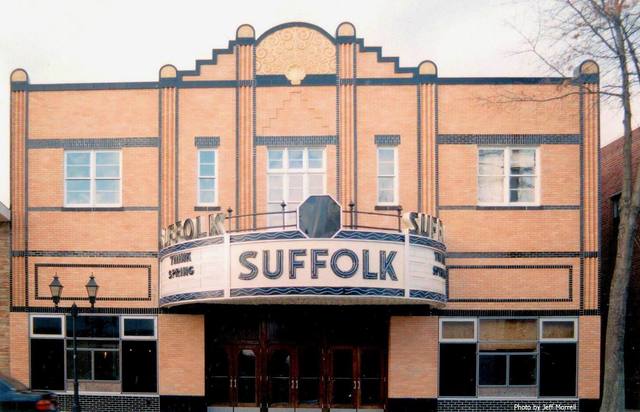 The Suffolk Theater is the last remaining movie palace designed by architect R. Thomas Short, and the last remaining large Art Deco style theatre on Long Island. The theater was built as a National Recovery Act project for the Century Theaters chain. A.H. Schwartz of the Romack Construction Corporation of Brooklyn constructed the Suffolk Theater in just two and a half months.

The 1,012-seat Suffolk Theater was opened on December 30, 1933. According to newspapers of the day, more than 2,000 people attended the opening night festivities. When the theater opened, it was hailed as ‘Long Island’s prettiest and most complete playhouse’. State of the art air conditioning attracted special raves for the ‘ever cleaning of the air’. An opening review in the Riverhead News on January 5, 1934 states ‘No matter which way one turns, there is luxury and comfort, this is exceptionally true in the reception corridor and ladies room as well as the entrance lobby’.

During World War II, the Suffolk Theater was an official issuing agent for the U.S. War Bonds. Organizers such as the Long Island Farm Bureau regularly used the theater for special meetings.

At the opening ceremonies, then Riverhead town superviser, Milton Burns expressed the hope that the theater would bring economic benefits to the downtown shopping area. It did just that, until changes in shopping habits, a shifting economy and the birth of the multiplex forced the Suffolk Theater to close in 1987. The theater was ‘For Sale’ from 1987 until 1994, when the town of Riverhead purchased the theater. The theater had been operated by the Prudential chain for most of its life, and was lastly operated by United Artists Theatres.

In 1996, cinematographer, Keith DiNeilli and producer Jeff Bassetti, filmed the movie “Changeover” in the Suffolk Theater. “Changeover” is set in 1978 and revolves around the closing of the Suffolk Theater, due to increasing popularity of the multiplex, and how it impacts upon the lives of its young employees. The theater sat idle for about 23 years. Except for the replaced carpeting, the interior of the theater is exactly as it was in 1933. The theater’s interior flourishing', include Woodland-motif murals and carvings, a mosaic water fountain, woven wall coverings and crane-etched windows are intact but tired and worn.

It reopened as a cabaret/restaurant performance space on March 2, 2013. Classic films are also part of the programming.

Re my earlier comment. Went to a play at Studio 54 the other night, traditional seating restored.

According to a current ad on Facebook: “A 350 seat Art Deco theater newly restored as a state of the art performance venue.”

After some years of negotiations Riverhead will, once again, have a dedicated movie theater. A section of the Riverhead Plaza will be demolished and a free standing, 10 screen, Regal Theater, seating 1,490, will be erected. Two things allowed this to happen: zoning was changed to permit erection of a theater on other than Main Street (location of the Suffolk and the former, demolished Riverhead) and Walmart relocated offering up a large space with ample parking at the Riverhead Plaza. The signage is up announcing the coming theater but no date has been announced and no demolition has begun.

As an aside, Peconic Bay Medical Center leases a section of the parking lot for its employees and buses them to their facility some distance away. Wonder how that will play out.

Regal had announced a date when they would have a presence at the Sunrise Mall in Massapequa, presumably in the space vacated by Walmart since there was really no room for a free standing building. They didn’t follow through on that. They must have realized that the area was already saturated with two multiplexes in nearby Farmingdale. The closest theaters to Riverhead now are Westhampton Beach, probably eight miles, and Mattituck and Hampton Bays which would be further.

At the beginning of negotiations the leasing agent wanted Regal to also upgrade the facade of the balance of the stores in the Plaza. Time will tell if that happens or whether the theater actually gets built.

Rob, you the man. Thanks for staying on top of these developments…

The theater now provides a spectacular venue for weddings and other events. See photos uploaded from their site.

The Riverhead Center sign announcing the forthcoming Regal Cinemas (see photo section) is no longer there. Did the sign meet with a problem or has the deal fallen through? This has been back and forth for over a year with Regal, the owner of the site and the town. Seemingly all the zoning problems had been overcome. In 2001 a deal to have a multiplex at the Riverhead Tanger Outlets also fell through. The town approved, but Tanger did not and chose a retailer to fill the space. The Tanger folk did allow a theater at the Commack outlet they subsequently built.

Regal deal must really be dead. There is petition being circulated to get a national movie chain to build a theater in Riverhead.

The theatre has a new Executive Director who wants to segue from the dinner theatre concept to a full-fledged non-profit performing arts center.

Plans have been submitted for a five-story addition to the back of the theatre which will allow for the expansion of the stage, provide wings and a backstage area with a green room and dressing rooms. There would be retail space on the ground floor and 28 market rate rental apartments above.

(The back of the building is on a Municipal Parking lot. The last thing Riverhead needs is rental apartments since a half dozen new buildings have risen during the past couple of years.)

The Town has received a ten-million-dollar grant for the revitalization of downtown. The Suffolk Theatre will benefit from this.

(I don’t see that tearing down a bunch of empty stores and putting in a park is going to revitalize Riverhead. Other than the theatre and the Atlantis Aquarium all the town has to offer is a handful of restaurants.)

The theatre is positioned directly opposite of the Town Square Project which will link Main Street to the Peconic Riverfront.