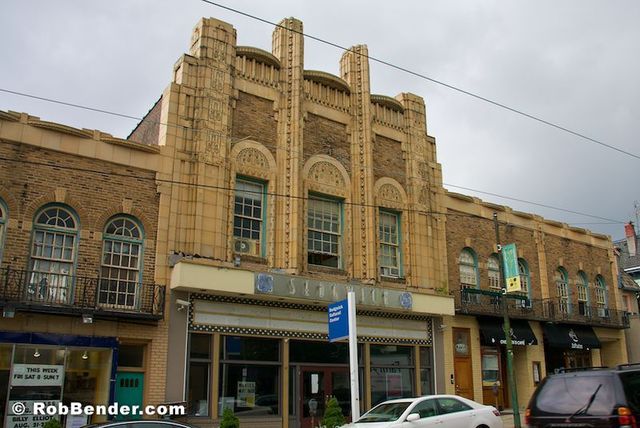 Designed by prolific Pennsylvania theatre architect William H. Lee and opened October 8, 1928, the 1,636 seat Sedgwick Theatre was named after the first name of the developer’s son, who was Sedgwick Tourison. It is located in the Mount Airy area of Philadelphia, on Germantown Avenue. It was equipped with a 2 manual Moller theatre organ. By 1941 it was operated by Warner Bros. Circuit Management Corp. It remained in operation until 1966. The Sedgwick Theatre was afterward used as a warehouse for many years.

Since 1996, the theatre has been home to the Sedgwick Cultural Center, a showplace for the Mount Airy community, featuring a wide variety of activities, such as music, fine arts, children’s programs, film and many other events. It is now used as a live theatre by the Quintessence Theatre Group.

Here is a circa 1940s photo from the Irvin Glazer theater collection:
http://tinyurl.com/lq6j7k

Still no activity and the lobby is empty. The center must be out of business. The video store th the left of the theatre built a small screening room and shows movies. I guess it would cost to much to do it at the center. rg

The Theatre Historical Society visited the Sedgwick during their Philadelphia Conclave on July 11th of this year. It is indeed still in operation as a community center in the section of the building housing the lobbies.

We also went into the auitorium, but had to do so through the stage loading dock doors as it is still sealed off from the lobbies and used as a wharehouse. Wow, what a beautiful ceiling.

The lobbies have some spectacular art deco plaster work, but quite a bit of it is damaged and missing. It will take a lot to bring it back to it’s former glory.

Is the moving and storage co. still the owner of the building. Many years ago the owner gave me a tour again you must use the loading dock doors to get auditorium. He took the time to show me the entire building. What a great theatre it once was. When it was open my buddie and go to this theatre along with the others on Germantown Ave and the one ones on Chelton Ave. As a kid my grandmother ran the Chelten theatre one of the small houses in the area. rg

Hello from England ! Very interesting to read about the Sedgwick Theatre – and see the photos of the wonderful Art Deco interior. I am researching my family tree and there is a connection with the Sedgwick Theatre. – My Great Aunt May ( from England ) married a man called ‘Lee Balsley’ ( I think it is Lee, but definitely Balsley ), and he was the Manager at the Sedgwick Theatre for a time. I don’t know dates but I am guessing it was after the end of WW2. If anyone has any further information, that would be of interest. Many thanks. Graham Brown. Essex. England.

A new life for the Sedgwick?
View link

“In a recent interview Burns noted that when he first started cleaning up the Sedgwick for ‘Measure for Measure,’ he spent four days just removing the dust and grime that had collected since the place had been turned into a warehouse some years ago.”

suggests that maybe they’ll reopen the main theater? for now they’re just in the lobby. this NEEDS to be done!

Can anyone tell me what the link to “Sedgwick” is? Interested in history of the theatre’s name.

It seems they had a webpage which is now defunct (the Wikipedia mpage has a link to the Archive.org version) – also at one time the “Sedgewick Theatre” and “sedgewick cultural center” became separate entities. Currently, the theatre is being used by the Quintessance Theatre Group (http://quintessencetheatre.org/) which has an active calendar of events.

I came across this article in MOTION PICTURE HERALD March 15, 1941 about a police raid on the Sedgwick.

As the courts in Philadelphia ruled theatre chance games were games of skill, the city police were raiding a cooking show at a theatre on the charge that it was an illegal lottery because of a door prize feature.

“Quizzo” and “Lucky 13,” successors to “Bingo” in the city’s neighborhood movie houses, were officially pronounced games of skill by Quarter Sessions Court Judge Eugene V. Alessandroni, in a test suit. His ruling carried a “but” which is big enough to warrant police action if operators yield to temptation to turn the games into lotteries. Police, however, permitted the cooking schools conducted in Warner houses by the Philadelphia Record to continue on Wednesday after the paper agreed to award prizes for a quiz contest rather than for door-stub numbers.

“The conduct of this game was apparently legal,” said the court. “We cannot help but feel that since control over not only the choice of the question but also over its composition and the answer thereto considered to be correct, is vested exclusively in the management, unscrupulous manipulation of these factors can readily change this from what appears to be a game of skill into one of chance.” It was pointed out that this possibility left final supervision of the conduct of the game to police authorites.

Also last Thursday, police raided the Sedgewick Theatre, a Warner Brothers house, where more than 700 women were attending a kitchen and cooking show prior to the matinee. Entry was made after ten door prizes had been awarded with 20 additional lucky numbers to be selected for as many additional prizes.

The cooking sessions were sponsored by the Philadelphia Record in co-operation with the Electrical Association of Philadelphia and conducted on Tuesdays and Thursdays, rotating at 21 neighborhood Warner theatres in the city. Police action at this time came as a surprise since the cooking schools have been in session for two years, this being the third time around the circuit.

Police contended that the award of door prizes was akin to Bank Night, every admission ticket being numbered with the wininng numbers drawn as for a Bank Night. Value of the prizes for the entire series of 21 sessions was set at $25,000 with a grand prize of a 1941 Ford De Luxe Tudor Sedan. The sessions were an advertising promotion on part of the newspaper, merchants buying space to exploit the school and contributing the prizes as well. . . . The article went on about legal attacks on theaters throughout the country for conducting games of chance like door prizes.