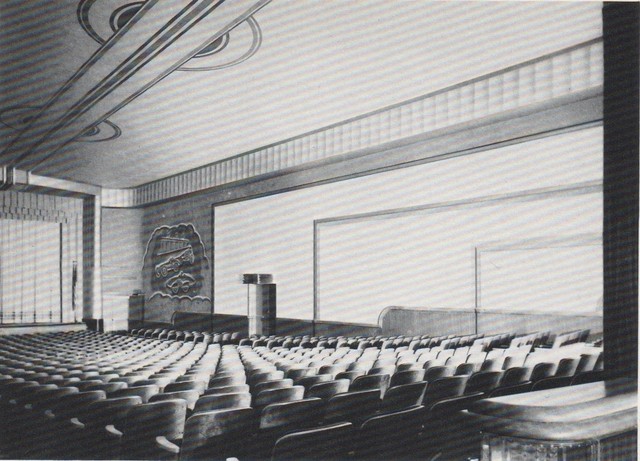 The Chelten Theatre opened on September 21, 1938 with Ginger Rogers in “Having Wonderful Time”, with seating for around 800. The Art Moderne style theater was located on Chelten Avenue near Ardeleigh Street and designed by the firm of Thalheimer & Weitz.

The Chelten Theatre was closed on January 1, 1952 with Mark Stevens & Rhonda Fleming in “Little Egypt” & Leo Gorcey & Huntz Hall in “Bowery Battalion”. It was taken over by a church on October 23, 1954, but also screened Christian movies as the Reel Pulpit, Christian Youth Cinema and Christian Cinema until 1973, and afterward just church use.

The Chelten Theatre, located at 1159 E. Chelten Avenue (Chelten & Anderson Street), was an 800 seat theatre that opened in 1935. Never inside the theatre myself, the exterior is a modern, contemporary style that one site refers to as “art moderne”. As a movie theatre that showed current films, this theatre actually had a short run. The theatre started showing Christian films around 1953 or 1954. That is how I remember this theatre, as a Christian film cinema. It continued to show Christian films until 1973, when it was converted into a church. Today, it is still a church and still very resembles the theatre that opened in 1935, but the marquee is now gone.

I was born and raised in Germantown. This theatre closed before my time (showed Christian films during my growing-up years). Curious about it though. Anybody remember what it looked like inside? Email me at or post what you remember here. Thanks.

Here is the theater as it appeared a few years ago:
http://tinyurl.com/yhumxpt

The operator of the Christian theater here (the last one, anyway) was the Reverend Harry Bristow, who had programs on Channel 29 and WTEL radio. A 1970’s Philadelphia Magazine story on movie theaters said that he left this venue and moved to the Ambler Theatre because of racial tensions in the neighborhood.

There seems to be some confusion between the Allen Theatre and the Chelten Auditorium. Although they were only several yards apart, they were two separate theaters.

The Allen seated 400 and opened in 1924 at 1209 E. Chelten Avenue NEAR Anderson Street. It closed in 1964 and today is storage for an adjacent “Restoration Temple Worship Center.” Now nondescript, the building gives no clue that it was ever a movie house.

The Chelten Auditorium seated 800 and opened in 1935 at 1159 E. Chelten Avenue AT Anderson Street. It closed in 1953 but was resurrected as a Christian Cinema showing religious films until 1973 when the theater became the
“Chestnut Hill Church.” The church continues today.

Except for the absence of the marquee, the building has changed very little since!

Lewen Pizor and Charles Segall opened the Chelten Theatre on September 21, 1938 with Ginger Rogers in “Having Wonderful Time.” It closed January 1, 1952 with “Little Egypt” and “Bowery Batallion.”