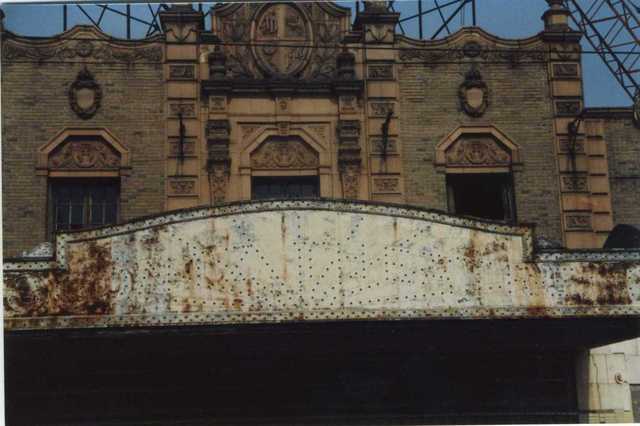 The Ogontz Thetare was built for Samuel Shapiro in 1926-27, designed by the firm of Hoffman-Henon Co. in association with the firm of Magaziner, Eberhard & Harris. It was opened February 4, 1927 with George Sydney in “The Auctioneer”. The theatre organ was opened by organist Karl Bonawitz. By 1941 it was operated by Warner Bros. Circuit Management Corp. The 1,777 seat Ogontz Theatre was demolished in 1985.

This theatre after it stopped showing films sat empty but then became a stage theatre. They tried to bring in plays/musicals and rock n rolls shows (like the Uptown) It didn’t last long because of the area. At one point I tried to lease the theatre for movies but when StanleyWarner closed a theatre they just tour everything out so it could not be used as a movie house. rg

Thumbnails at this link, don’t try to expand without a paid subscription:
View link

Here are two expanded views of the PAB thumbnails posted on 3/7/05. The photos are from the Irvin Glazer collection. The marquee in the first photo says “City of David”, but I’m not sure if that was a film:
http://tinyurl.com/23fowv
http://tinyurl.com/ynsvvp

This theater was built with two stores to the front of the auditorium on Ogontz Avenue, one on each side of the theater foyer/lobby.

A roof sign framed in chase lights read OGONTZ in incandescent bulbs. The two vacant lines beneath OGONTZ probably read PHOTOPLAYS and VAUDEVILLE as this sign was very similar to the roof sign of the Oxford Theatre in Burholme. Both theaters staged vaudeville.

The marquee was three sided. The front had a neon sunburst behind the lettering OGONTZ THEATRE. The sides (or ends) had the lettering OGONTZ above the signboard and featured individual letters that actually plugged into the signboard and lit up. Chase lights outlined all three sides. Today it’s an empty lot between the Ogontz Free Library of Philadelphia and Ed’s Pizza House.

Does anyone know what style this theater was built in?

This opened on February 4th, 1927. Its grand opening ad can be found in the photo section for this theatre.