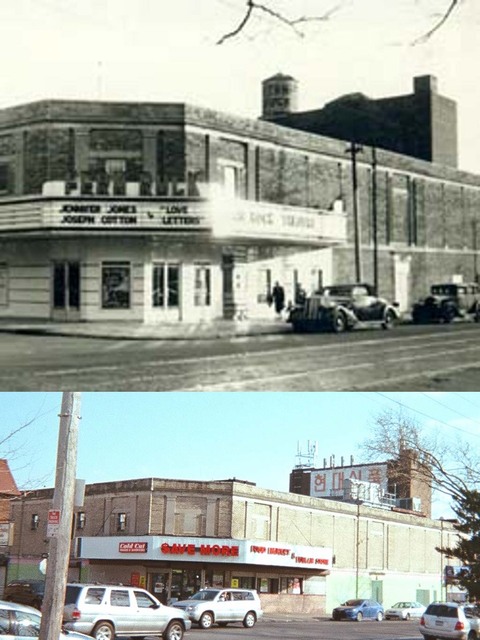 Located on N. 5th Street, across from Fisher Park. Opened as the Fern Rock Theatre on July 9, 1928 with George Sidney in “The Cohens and Kellys in Paris” plus vaudeville on the stage. Independently operated until 1942 when it was taken over by Warner Bros.

The 1,289-seat Fern Rock Theatre was designed by the firm of Hodgens & Hill, whose other Philadelphia theatres include the Frankford Theatre, Roosevelt Theatre, Cambria Theatre, and Admiral Theatre, among many others. The vestibule & foyer were constructed of Spanish stone and solid walnut. The auditorium was in a classic Georgian style with a yellow & gold color scheme. There was extensive use of gold leaf throughout. The auditorium had a huge crystal chandelier in the central dome, which was done entirely in gold leaf. A completely equipped stage and a Wurlitzer organ was installed. The Fern Rock Theatre was initially a vaudeville and moving picture theatre with an eleven piece orchestra. When talkies arrived, vaudeville ceased.

In October 1971, the Fern Rock Theatre was acquired by the Sameric chain, and twinned. The theatre closed on November 8, 1987 with Lisa Schrage in “Prom Night II” & Catherine Mary Stewart in “Nightflyers”.

I have a photo from the same source of the Teatro Puerto Rico on 6th and Diamond. If anyone knows of the previous incarnation under which this theater may be listed, please let me know. Thanks.

It appears to be a dollar store now.

I remember the chandolier and the vending machine. This was 5 minutes from my house across from Dougherty. The vending machine had a ??? mystery slot. My friends would get good stuff but everytime I pulled the lever, I got NIBS. I’ve since developed a taste for licorice but I hated it as a kid. 15 of us saw “The Alamo” together and, after the flick, we ran across the street to Fishers Park and re-enacted the battle scenes.

The Fern Rock was my first job in 1985. I will never forget the great times we had..

Not a dollar store. It’s a grocery store — Save More Food Market.

The venue was announced in 1927 for independent operator George Schwinn. The venue was ambitious and costly aimed at combining vaudeville and silent films with a live band and organ. It opened as the Fern Rock Theatre on July 9, 1928 with “The Cohens and the Kellys in Paris” and other silent films as well as vaudeville acts headed by Silver Toes.

Herbert J. Elliott, another independent operator, acquired the theatre in 1929 and wired the venue for sound. Elliott remained fiercely independent in his tenure at the Fern Rock and sued the major Hollywood studios in 1934 for inability to get the films he wanted. He sued Warner Bros. on the same charges in 1938. Elliot modernized the facility in 1939 including a Simplex Four Star Sound system. He also launched another lawsuit suing competing theaters. He was more successful in his suits than most others as he would sometimes get limited clearances.

Stanley-Warner finally created an operational agreement with Elliott to grant clearances to Elliot’s Fern Park and took over his other house, the Colney Theatre. Elliot, who had maintained the independent operation of the Fern Rock for some 13 years, would then sell out the Fern Park in 1942 to Stanley Warner Circuit.