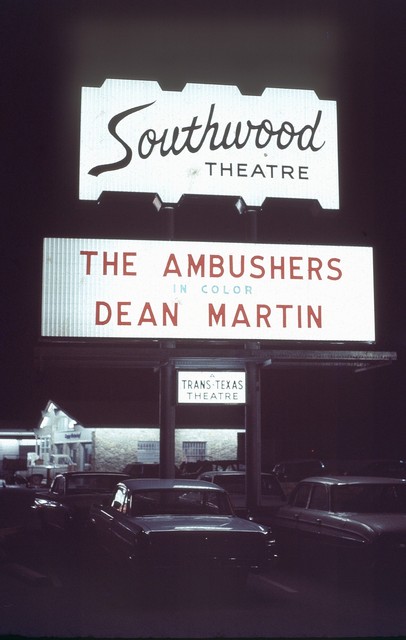 The Southwood Theatre was built as a single screen seating 868 by Trans-Texas Theatres. It was opened February 17, 1967 with Maurice Chevalier in “Monkey’s, Go Home!”. It had 1,000 seats. It was twinned on Setpember 30, 1977 and acquired by AMC. In 1989 it changed ownership again becoming part of the Presidio Theatres.

The building is a striking one with the exterior in a light colored linestone brick. A corner entrance to the theatre with an awning running around from the entrance down the side of the building.

Since closing in 1996 it has had retail outlets in the gutted theatre one of which was a laser tag operation.

I agree, but Blazer Tag is also what you see when you google the address, map-wise.

Also, the chain should be unknown, and not AMC Theaters.

The Southwood was an AMC theater in 1981-1982. It was a dollar movie house. I worked there as an assistant manager my last year of college.

I’m sure that the auditorium was magnificent when it was a single-screen, but it was a bit awkward split down the middle.

In November 1987 I met my husband here. He was the General Manager at Southwood Theater (AMC) and he was also serving as the division manager for National Cinema Network for the Austin Region. He won division and national promotion contests with AMC and promoted with many non-profit agencies and radio stations in this region. His promotions from 1987 included the first benefits for the Capital Area Food Bank and the Austin Animal Shelters as well as many other non-profits matched with radio stations to promote a special events. 1987 is still known as the most giving year in Austin and it started right inside the Southwood dollar theater. I was selling advertisements for my new “Just 4 Kids Magazine” and since working with him at Southwood in 1987 we have continued to promote entertainment in this region, state and throughout the world.

This theater was the home of my first job in 1990 when I was 17 years old and it still holds the best memories. I worked here for 4 years and miss the people I met there. It was a great place. I wish everyone could experience a place like this, but they don’t seem to still exist.

Pulled some booth shifts here in the early to mid 70’s. It was a great booth. Almost as good as the Americana. Trans-Texas was good to work for and had some good friends there.

A brief history of Trans-Texas Theaters is part of the inventory of the company’s papers at the Austin History Center and can be read online at this link (the collection itself is not available online.) The history says that the Southwood Theatre opened on February 17, 1967, and was designed by architect Leon Chandler.

I worked here for several years in the early 90s before moving on. I recall roof leaks always being an issue. And for some reason they had sump pumps down in the front behind the screen. Once when they broke we had to wet vac it out every night until it was replaced. Does anyone know the date when it finally shutdown as a theater? 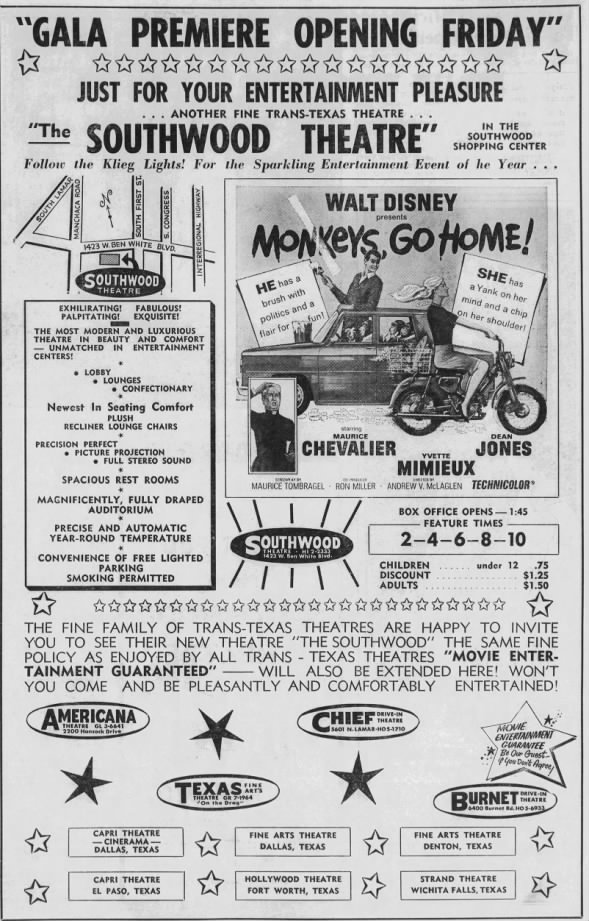 became a twin cinema on September 30th, 1977. Another ad in the photo section.