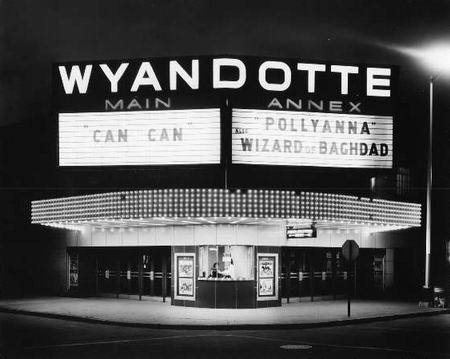 The 1,500-seat Wyandotte Main Theatre was opened in August 1938. The 800-seat Wyandotte Annex Theatre was built adjacent to the main theatre and opened on January 1, 1942 with Ronald Colman in “My Life With Caroline” & “Burma Cowboy”. They were the biggest first run movie theaters in the “Downriver” area of Metro Detroit.

I don’t know much else about it’s history at the moment, but will research it soon (seeing that our company is speculating the purchase of this building, the Eastown or maybe even United Artists, for a performing arts venue).

It was supposed to become the Trillium Performing Arts Center…nearly $2,000,000 was put into renovations up until 2002, when fund raising became a problem (9/11). Trillium has gone belly-up as far as anybody knows. The theater is boarded up (which looks awful in downtown Wyandotte, a thriving small town). It was used in October, 2004 for a haunted house…sheesh. More news to come!

Boxoffice Magazine ran an item about the opening of the Wyandotte Theatre in their issue of August 20, 1938. It was a single-screen theater with 1,500 seats, and was decorated in an American Indian motif.

The earliest mention of the Wyandotte as a duplex theater I’ve found is in the August 16, 1941, issue of Boxoffice which said that National Theatre Supply had received an order for carpeting and booth equipment for the project.

The January 10, 1942, issue of Boxoffice said that the Wyandotte Theatre’s Annex had opened on New Year’s Day. The original plan for the house had been to show double bills in one auditorium with a single feature and short subjects in the other, but the policy management settled on was to have both auditoriums running the same double feature program, but on a staggered schedule.

I ran across a 1958 Boxoffice item (which I’ve now lost track of, unfortunately) which reported that a minor fire had taken place in the main auditorium of the Wyandotte Theatre during a performance. Though the fire had been quickly extinguished the auditorium smelled of smoke, and so the audience was moved to the smaller auditorium, which had not been in use that night, and the show continued there.

The item said that one or the other of the auditoriums was usually not in use by this time, and the auditorium management opened on a given night depended on how much business they were expecting for the scheduled program. I’ve not been able to find out when they began using both auditoriums on a regular basis again.

The Three Stooges Fan Club is trying to confirm a Public Appearance by Them (Moe, Larry and Curly), possibly Friday, Saturday and Sunday September 18, 19 & 20, 1936. I saw posts that the theatre opened in 1938. If anyone can confirm dates and/or has display ads, or possibly a newspaper write-up, it will be appreciated. Thanks, Frank Reighter

Bobcat, I saw the X rated “Adventures of Emmanuelle” at the Wyandotte. However, I don’t recall if they were showing X rated movies regularly at the time.

When i was a kid i remember Mr. Beaman who was the manager would come out on the stage and tell all the young teens that the that they had to leave befor 9PM that the city wanted all young people to be off the streets at that time.

January 1st, 1942 grand opening as a twin ad in photo section. This was not the first twin theater in the Detroit area. The honor goes to the Duplex, which opened in 1915.

Multiple photos added, and the link below has even more of it’s demolition.

Opened with “My life with Caroline”, and “Burma cowboy”.