Paradise Center for the Arts

Paradise Center for the Arts (Official) 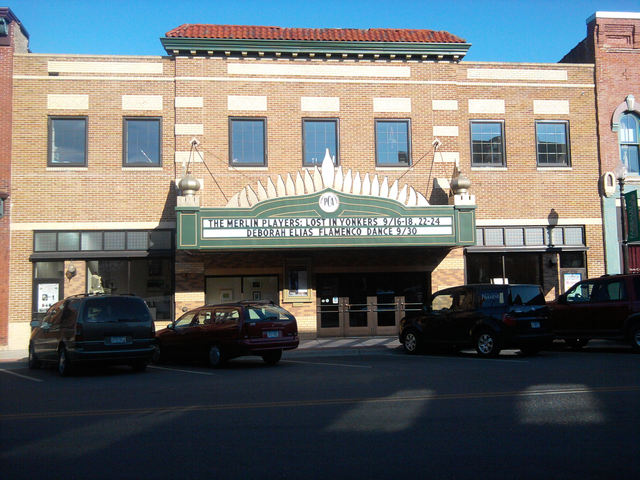 I visited the theatre yesterday. They are planning to open in October.
They seem to be coming along nicely in auditorium but the marquee is not up yet.
It’s going to be a great little cinema.

Theatre has its grand re-opening on 20 October.

Interesting that the exterior photo of the Paradise on their website shows a vertical sign with the name “Paramount.” There’s no mention of the theatre ever having been called the Paramount. I wonder if they used the wrong photo?

I was lucky enough to tour the theater when it was still running, ran down an hour from Minneapolis. The owner was a very nice gentleman who let me roam the theater freely (while he went to lunch somewhere) for over an hour and a half. It is beautiful inside. The nice thing about the trip is since he was not long away from closing, he showed me about 14 boxes and asked if I wanted them. I arranged for transferring them home and when I started opening them,….lobby card sets from movies like Sound of Music and Greatest Story ever told, 6 boxes full of pressbooks (one for each studio) and the others were one sheets and Boxoffice magazines from the 1940’s and 1950’s.They were not in the basement so were in good shape. Guess my day was very lucky, the final owner of this theater as a movie house was one of the nicest guys I had ever met (and I would still say that had he given me nothing). Here’s a link to a picture: View link

I just added a 1920’s photo of the Grand Theatre, which preceded the Paradise on the same site. The Grand Theatre burned down in 1927, according to a 2004 article in the Faribault Daily News. The article also mentioned a poured concrete foundation for the Paradise. To avoid the same fate as the Grand. It is probably not necessary to create a separate page for the Grand Theatre. As the address was the same as the Paradise. But the name should be added as past names. I found the photo on a Facebook page called “You know you grew up in Faribault when…” I credited Brian Schmidt who posted the photo.

OK, Update & Correction. The Grand Theatre burned down in 1927. The Paramount was built in 1928, and was renamed the Paradise sometime after 1933. I added a program and exterior image from that year for the Paramount, to the photos section.

Last correction. The Grand Theatre fire must have happened in 1928, not 1927. I just added a much nicer photo of the Grand Theatre with Richard Dix “Easy Come Easy Go” on the marquee. Which was released 04/21/28.

I’ve got an advertising herald for WHAT PRICE GLORY (1927), which was showing at the Grand Theatre – Faribault starting Wednesday, January 11, 1928.