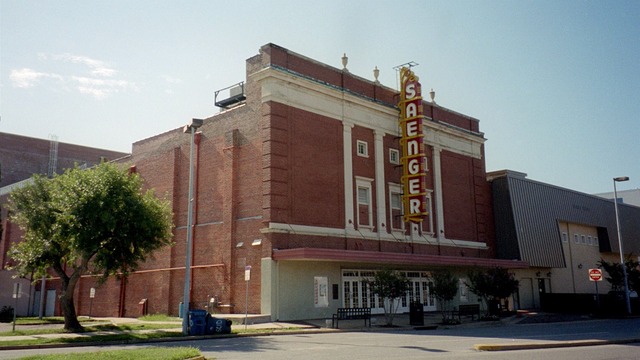 With seating for 1,245 people, the theater’s acoustics were built so that, as the local paper reported, even a whisper on stage could be heard by all. The theater also featured 3 levels of dressing rooms, which were accessed by the use of a spiral staircase, and a backstage electric control panel that could control every light in the theater.

The first movie to be shown in the Saenger was “Interference”, produced by Paramount and billed as a 100% all-talking picture and stared Clive Brooks, Evelyn Bront, William Powell, and Doris Kenyon. This was a first for Biloxi and during its early years, the Biloxi Saenger Theatre hosted talkies, travelling shows, and vaudeville performances. Eventually, though, moving pictures took over entirely and the fine Wurlitzer organ was replaced by a piano.

Over the next four decades, the theater changed hands several times and last operated as a movie house under the ABC Theaters banner. In 1974, a fire closed the theater and, in 1975, ABC deeded the theater to the city of Biloxi. The brick and steel structure remained sound and quite ready for renovation and the first phase of which was begun in that same year. The year 1981 saw the addition of a green room, and, in 1983, the Biloxi Saenger Theatre was placed on the National Register of Historic Places.

In the late-1990’s, the colorful electric sign was replaced with a duplicate of the original and in 2001 the lobby was restored. Further restoration was completed in 2010.

I hope that in time we will know the status of this theatre in Biloxi as I haven’t heard much about any theatres on TV though I do realize this is NOT a priority right now.

TC: Nice photo. I fear that it has sustained Katrina damage.

I started my professional acting career on this stage. I did several plays, musicals, as well as an original rock opera here. Sadly, almost all of this area was swept away by Katrina. This old theater, was in the old part of Biloxi, fairly close to the beach. Although I don’t know for sure, I assume it’s gone. I would be pleasently surprised it it’s still standing. Although the chessy restoration efforts removed the classic feel it had, I hope something is left. Growing up in the 1970’s, they rarely showed films here, but like most old theaters, the Saenger had a full stage, with rigging a backstage and dressing rooms. It was really a cool old place. I got bitten by a monkey in “Inherit The Wind”, and fell in love in “Dracula”. My late friend David Lucas, put on many shows there in the late 1980’s, I was involved in them all. David passed away shortly after I moved to Hollywood, Ca. Now, I live just blocks from Graumann’s Chinese Theater, but the Saenger Theater in Biloxi holds a piece of my soul. Still standing or not.

Glad to read that this theatre has been restored and is back in operation since Katrina, but I’ve been wondering about N.O. theatres and any update on them?

Great before and after interior photos!

December 25, 1961——as a young airman—-stationed at Keesler AFB at Biloxi and away from home at Christmas for the first time—on a rainy Sunday—-just before Christmas—-I went to the Saenger and saw Pocketfull of Miracles——Glen Ford and Bette Davis—-it remains one of my favorite films—flickerfan

According to their website- they have finished restoring the auditorium and had their grand reopening in November 2010! 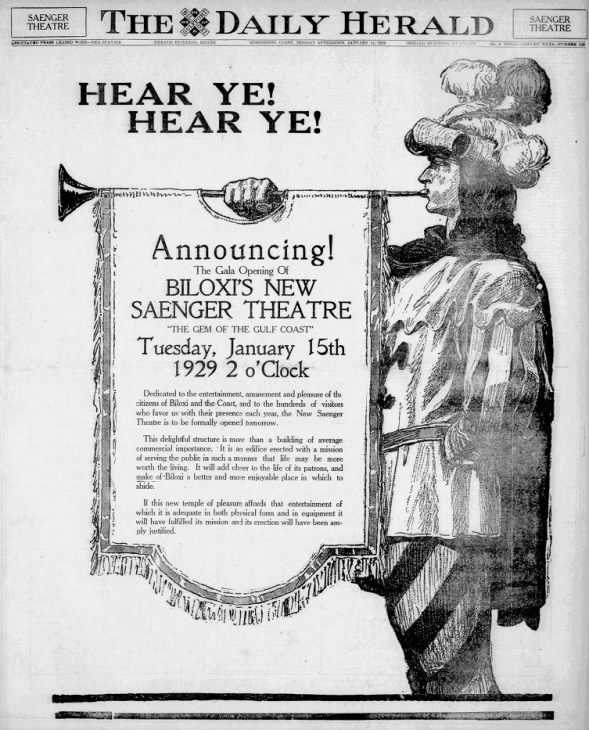