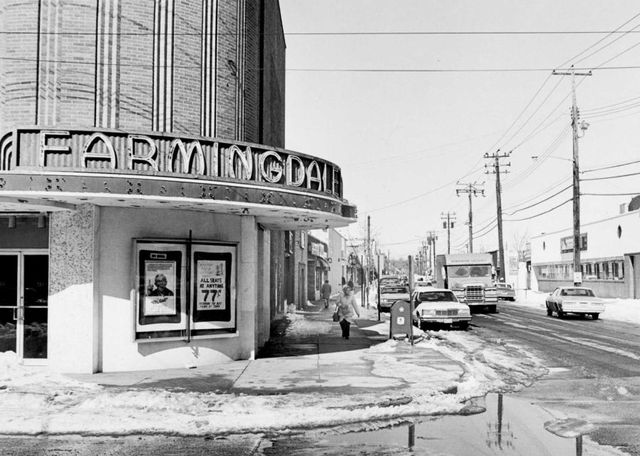 The Farmingdale Theater was located right in the center (or near enough to it) in the village of Farmingdale. The theater blended perfectly in with the small town feel of the village area. It opened in 1942 and suffered damage from a fire in 1950.

This section of Farmingdale was really charming in the 1970’s. I don’t know how it is now. In later years, the “downtown” area began to whither. The theater, I think, closed down in the early-1980’s but I don’t know for sure.

In the late-1970’s when I went there a couple of times, it was a discount theater. The admission was the last two digits of the year. It was closed in 1984.

To NYer:
Thank you so much for the info!

I SAW RUSS MEYER’S “BEYOND THE VALLEY OF THE DOLLS”,“INVASION OF THE BEE GIRLS”,“THE LEGEND OF BOGGY CREEK"and"MY NAME IS NOBODY"with TERENCE HILL and HENRY FONDA. WHEN I MOVED TO FARMINGDALE VILLAGE in "1976” THE PRICE OF A TICKET WAS .76 CENTS.

I saw the re-release of the late “1950’s” Steve Reeves movies “Hercules” and “Hercules Unchained” at the Farmingdale theater. I had originally seen them on W.O.R. channel nine. It was a big treat to see it on the “Big” screen. Steve Reeves had been the 1948 Mr. Universe, went to Italy, and became an international “star” making mostly Greek legends and Roman hero roles. When the genre died in the mid 60’s he retired. The new trend would be the spaghetti western, starting with the original “Django” starring Franco Nero.

Jim C. Thank you for all the photos and info !

Apparently the balcony is still in tact. Would love to see photos of that.

See the photo section announcing that the theatre was going to be twinned for a February 1981 opening. Never happened. I presumed 1981 because the film being shown was Private Benjamin which was a 1980 film.