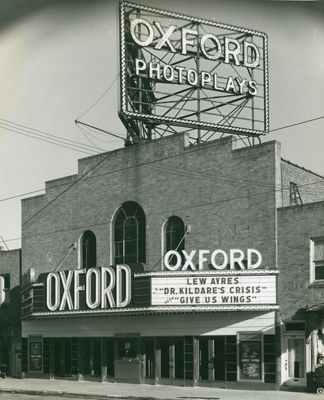 The Oxford Theatre opened on Sunday evening, January 1, 1928, seating 1,964 on one floor. The theatre was built in the Philadelphia district of Burholme, on Rising Sun Avenue at Cottman Street, near St. Vincent Street, not far from Oxford Avenue. The opening day program had photos and described the theatre. Opening prices ranged from 15 cents for children for matinees to 35 cents for adults at evening shows. The theatre opened with a soda fountain and a candy department that included local Whitman candy.

The theatre was designed by Philadelphia architect William Ellis Groben, who also designed Philadelphia’s Carman Theatre, and redesigned the Hiway Theatre in Jenkintown, Pennsylvania during the 1930’s. During construction, underground springs were encountered, and rock had to be blasted. The building included seven apartments and stores, as well as a back stage and dressing rooms. For budget reasons, the exterior was a simple brick facade, with a marquee. The roof sign was sixteen by twenty-four feet and had seventeen hundred bulbs with the effect of being gold.

A two story vestibule was decorated in plaster with Spanish Mission style colors and walls of a combed tapestry texture of stucco in pink with a brown top and at the bottom a gray background with a lavender top, a multicolored tile floor, marble wainscoting, and wrought iron balconies at the windows.

The vestibule led to a lobby with mirrors and frames on each side. The lobby was decorated with stucco in colors of cream and lavender in a sponge swirl and trowel effect. Irregular flagstones in the lobby gave the effect of a Spanish court or palazzo. The lobby led to the auditorium foyer.

The foyer was decorated with stucco of a Spanish swirl of ivory, tan, green, and rose. Drinking fountains were of polychrome Spanish terra cotta and tile.

At opposite ends of the foyer were two grand staircases that led to a mezzanine with a furnished men’s lounge and smoking room, and ladies parlors. The ladies lounge had furniture, a large fireplace and mirrors. The ladies lounge had grilled windows with a view of the vestibule and the main entrance. The stage could be seen from either lounge. The middle portion of the mezzanine held offices and the projection room.

The stage had a 50 foot wide proscenium opening. An orchestra was retained, and a Kimball three manual pipe organ installed. The auditorium had an elaborate plaster ceiling grille. The ceiling, main dome and four smaller domes, proscenium, borders and supporting columns were finished in two main color combinations. “Dull gold on dull red and bronzed green” dominated. The open ceiling was ivory. The organ chambers and the grille work of the portion of the ceiling towards the stage was plaster in style of faux wood. The domes were rendered in silver, light sky blues, and pink with polychrome borders. The outer edges and connecting sections to the smaller domes were in reddish brown and speckled marble. In the foyer and auditorium, stucco of a Spanish texture of brown yellow and chocolate prevailed.

Harry Brodsky was the theatre decorator. For carpet, artists from Hardwick and Magee of Philadelphia, designed an original Spanish style pattern. A Philadelphia manufacturer custom made furniture for the theatre. Collaborating with the decorator and carpet manufacturers, the furniture maker created upholstery such as might be found in a Spanish villa. Philadelphia’s Voigt Company supplied light fixtures to confirm with the Spanish decor. The lanterns in the auditorium and outer lobby and the lanterns outside (in style of old Spain) were finished in black and old gold, and fitted with mica. Philadelphia’s Vermont Marble Company supplied Northern Ivory marble for the ticket booth and radiators and Verdi antique for the base in the two lobbies and the foyer.

The Oxford Theatre opened for motion pictures and vaudeville. Bob Hope and Red Skelton appreared on on the stage. During the 1930’s live shows were reduced, eventually in that decade to Thursday evening amateur shows. By 1941 the Oxford Theatre was operated by Warner Bros. Circuit Management Corp.

The Oxford Theatre closed in 1975. The theatre was gutted in 1976 and converted into an atrium apartment house with 52 apartments. The dressing rooms were made into efficiency apartments. Entrance to the apartment house is through the former stage house. No longer present, but when closed, the roof sign board still proclaimed Oxford Photoplays.

Hey, I’m the guy that converted this over to apartments in the mid seventies – the person I bought it from wasn’t Budco – was a brother and brother in law – maybe they bought from Budco then I bought from them. This was a theatre I had always loved as a kid and knew they were going to knock it down so I decided to perserve it as best I could and kept the exterior intact while we converted the insides to 52 apartments. We were one of the earlier groups to do this – wish the others had kept there’s a little closer to the original. – Marsh B. Spink

I didn’t know about the Kimball organ in this theater. I just remember the last two or three rows of the theater had cushioned high back chairs, unlike the customary movie theater seats. We used to like to go there and curl up in them and watch the movies. Ushers periodically came around to tell us to get our feet off the seats.

A great painting depicting how this theater looked in its heyday can be seen at the following link: View link

Sorry for taking so long to reply to MBS. BUT as I stated in Nov. 2004 the theatre was operated and managed by Budco Theaters. They did NOT own it. It was independently owned as noted by MBS.

Pilgrim? Are you sure it wasn’t Pioneer? Also, given the historic theater structure’s tremendous similarity to Northeast Philadelphia’s Holme Theatre building, which was built the following year and designed by William E. Groben’s off-and-on colleague William Harold Lee (whom Groben would later team up with to redesign Jenkintown’s Hiway Theatre), I’m curious to know what type screen the Oxford had during its last days as a movie theater.

The Oxford Theatre was built for the presentation of motion pictures and live stage shows, (vaudeville). For this reason, the Oxford Theatre’s original screen was a fly screen. This type of screen is designed to be raised, (or fly), into the stage loft, an area above the proscenium arch. With the end of live stage shows years earlier, Budco Quality Theatres, Inc., operator of the Oxford, replaced this fly screen with a permanent screen and support structure during the early 1960’s. A new sound system was placed directly behind the screen. Of course this rendered the stage unuseable for any other purpose. The new screen was white and glass beaded with hundreds of small, evenly spaced holes to allow air to and from the speakers.

I remember going to a TON of Saturday matinees in the mid ‘60s here at the Oxford Theater! There was an alley on the right side of theater where we’d leave and make the short cut to Oxford Ave to go home. I’d see almost every horror movie there…they’d have them Saturday afternoons, along with some great comedies of the day. This place will always have a special place in my memories…….you’re only young once!!

I guess you were wearing your one-way political glasses again!