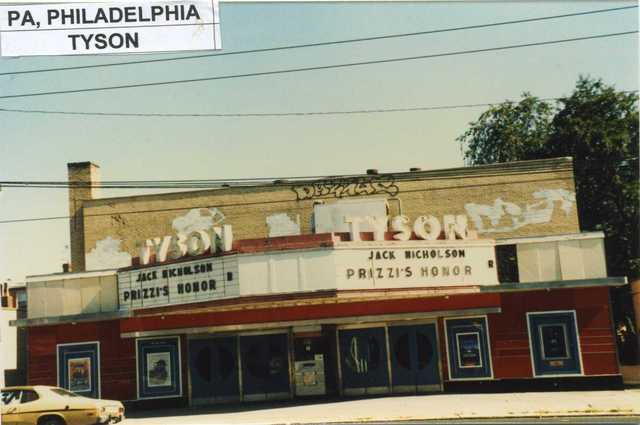 The Tyson Theater opened in 1940, designed by Philadelphia theater architect David Supowitz, and with 650 seats. The marquee had flashing red and green neon. The interior had murals looking like Atlantis, were done in shades of turquoise and salmon by the Paramount Decorating Co.

The Tyson Theater closed in August 1987 as a last run theater, with "Outrageous Fortune" as the last movie shown.

A December 3, 1987, Philadelphia Daily News article reported that Mirrow Furs had spent a half a million dollars to buy, refurbish and furnish the building as a store. Architects Ignatius Wong and Deborah Rouse of Urban Consultants retained the Art Deco theater look of the Tyson Theater. A mannequin was placed in the ticket booth. Instead of false walls and a dropped ceiling, the interior showed off its murals and retained its Art Moderne style light fixtures, its 28 foot ceiling and the projection booth. A baby grand player piano played for customers. It then became a furniture store.

On October 7, 2012, the building is scheduled to reopen as the Castor United Outlet, a retail bazaar with in-house vendors offering goods ranging from clothing to tools. It is unclear whether the original interior decor will survive.

I attended the Tyson when I moved to Philly in 1979. I remember it as being one of the nicer neighborhood theaters still operating in Northeast Philly at the time. The murals on the walls of Atlantis were quite beautiful and it had a more than decent sized screen along with a nicely lit marquee. I actually presently live within a few blocks of the old Tyson, which is now a discount furnture store so I pass it every day.

My first job was cleaning up after the Saturday afternoon kiddie matinee in the early 50s for which I received no money but instead free admission to all movies for the following week. I forget the reason that my employment was terminated. I do remember the manager, Morris Lev, chasing Stanley Snyder and me out of the movie and down the street. Until that time, I saw every movie that played at the Tyson. There were four Ellis theatres in Oxford Circle. A movie would play first at the Regal Theatre, about a month after it closed at a downtown theatre, then a week later at the Benner Theatre, a week later at the Tyson Theatre and finally at the Castor Theatre. The Saturday matinees consisted of a serial (e.g. The Crimson GHost, Mark of Zorro, Jungle Girl), a kiddie featute (e.g. Abbot and Costello) and a western (e.g.; Johnny Mack brown, Gene Autry or Roy Rogers). Admission was 25 cents. No one under 12 was admitted under 12 was admitted into the Tyson for evening performances unless accompanied by an adult. Adults complained about unruly children.

Apparently some of the theater’s features were retained when it was adapted for retail, but it’s unknown if they will survive a conversion to a multi-user space. Brief story from Hidden City Philadelphia here.

There’s a new furniture store in the space. The murals are still intact, though they’re partly obscured by the merchandise. I just wonder how long they can last.

This property is again available for SALE or LEASE. Does anyone know what the interior looks like since those discount furniture stores moved on? I’m sure they had no interest in preservation! And without a doubt they sold the murals.