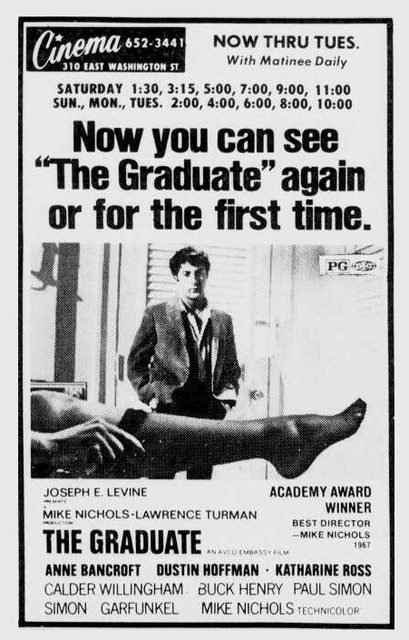 The theatre was re-modelled in 1942 with Art Deco styling. The architect was M. Abraham, and the original capacity was 702. In 1958, a storm damaged the marquee, which was replaced. In 1964, the theater was victimized by a horrible remodel, which covered the facade in prefab sheets of vomit-colored stucco. The vertical portion of the marquee was removed, the outdoor booth destroyed, and one door closed up. It closed in 2003.

In its last current configuration, the theater is a grimy beige on top, with the original pediments showing through. The ground floor was a nasty green. The marquee was still kind of neat, with a large neon ‘C’ and star logo in the middle, and the word ‘CINEMA’ over both sides. Not sure if any of the original style was hiding under the stucco.

The Cinema was demolished in August 2007.

JohnMessick: I’m familiar with the CT name, Norelco though didn’t know or have forgotten that he used to be a projectionist….those are the folks with great theatre memories!

You betcha…Norelco..at one time used to be a projectionist in my area…I had the opportunity to meet him and talk about area theaters he worked at….he is a well of knowledge.

Yes indeed! I was 14 when I started my first job as an usher at the New Castle Victor theatre. Now at 64 I have very fond memories of conversations with projectionists, stage hands and managers in and about the Pittsburgh area. When many of us were in our teens and twenties, these dedicated people where in their fifties and sixties. Nothing was better than sharing a coffee or a beer with one of these people. Their stories of people and events from the early days of theatrical entertainment. It was a right of passage for those of us you still believed in the magic and future of â€œthe business.â€

One of my favorite pieces of advice, when I was an Assistant Manager, was from an old projectionist who lectured me in the art of showmanship. He said: â€¦â€remember kid, if you donâ€™t want people to think this is second class grind house, ALWAYS close the curtain and bring up the footlights between the trailers and feature.â€

When people remember these picture palaces, itâ€™s a shame that the dedicated managers, projectionists and other career folks often get forgotten and unmentioned. Big chains and moneyed people may have built most of the theatres we have all loved; but it was, indeed, the staff and management that brought the magic to life every day.

Jack, do you have any information about the Cascade Theatre in New Castle, which was supposed to be the first theater operated by the Warner brothers? I keep coming across different dates for the opening. picture.

Hi Joe, Sorry for the delay, Iâ€™ve been working on a restoration. This info. (from memory) originally came from an old projection operator who was around at the time. The Warner Broâ€™s. had been going around Western PA and Eastern Ohio, near their Youngstown home, with a crank projector, a single film and a tent for use when weather or a vacant room were not available. One of the rooms they rented for this special event was part of, or adjacent to a funeral home on New Castleâ€™s E. Washington Street. They borrowed folding chairs from the funeral director and projected the film on a 7 foot mirror. Apparently the response was so good and New Castle was a bustling city with the worldâ€™s largest tin mill and many other industries that they decided to experiment with making New Castle a permanent location. The makeshift â€œtheatreâ€ was referred to as the Bijou (little Gem) and The Pioneer. After several months, in 1903, the moved a few doors down E. Washington Street to a more appropriate property and created the Cascade Theatre. The location later became a Neisner 5 and 10 store and is now called the Cascade Center with a lobby display representing the faÃ§ade of the Cascade Theatre and some vintage projectors. The Cascade was quickly followed by small â€œnickelodeonsâ€ such as the sheet metal-constructed Moravia Theatre, The Nixon (Victor), across the street from the Cascade, The Dome (Cinema), Park (Regent), Star, all on Washington Street and the Baltimore Strand on Long Avenue. In 1904 the Warnerâ€™s bought a small film company in Pittsburgh which eventually evolved into the Warner empire. Later, more elaborate theatres included the Capitol (vaudeville) and Penn theatres were constructed.

It would be nice to see a working â€œmodelâ€ of the Cascade created. It might show a Warner documentary film, classics, etc as a tourist attraction. Who know, maybe some dayâ€¦..

Gosh I remember going to this theater in the late 80s to see a full length feature of the Care Bears. My grand parents lived up Court Street so this theater was very close by. As a seven year old, I remember the place smelling like urine and the seats being really worn and squeaky.

In its reincarnation as the Cinema, its grand opening was Friday, November 22, 1968. The opening feature was the New Castle premiere of 2001: A Space Odyssey.

I am from the area and I have 4 photos of a Cinema" theater that matches the above description almost perfectly “but” the address is wrong and I never wrote down the site information when I got the pictures developed years ago. In 1 of the photos there is a similar 3 story brick structure 1 block away where the New Castle dry goods building is seen presently on Google maps .Also on the left outside wall of the building in the photos there is a plaque with the words “THEATRE OF DISTINCTION"I don’t want to upload photos if these are not the same buildings, but the similarities are very close. Can anyone help with a confirmation of my photos before I upload ?