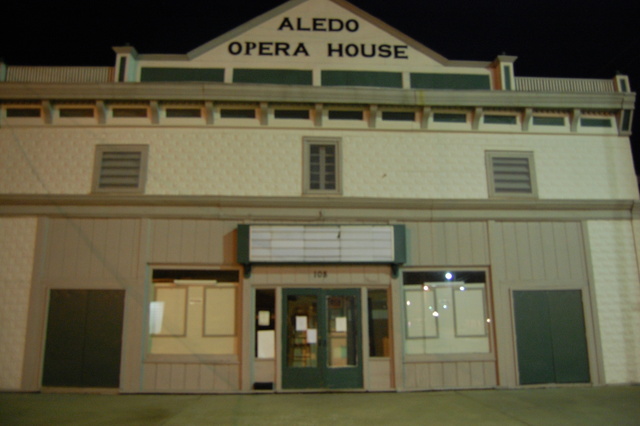 The Aledo Opera House opened in 1904 with movies starting in 1906. The theatre located on the first floor was last operated by Hart Theatres. It was closed in January 2016 and reopened in December 2016.

The Aledo Opera House has a misleading name since it was not used for opera. The Aledo Opera House started life as the Aledo Roller Rink, which is why its wooden floor isn’t sloped, like those of other movie houses. This theatre closed in June of 1997 because customers were lost to Quad-Cities theatres, and a health-department ban on popcorn sales without a food-service license.
The building was damaged in an October 2000 fire at an adjoining building which collapsed and fell through the Aledo Opera House roof, causing considerable damage.
The Aledo Opera House opened to the public as a theatre again on Sept.6, 2002. The seating capacity is 400+ seats counting the main floor and balcony.

Here are some renovation proposals:
http://tinyurl.com/4o35dx

The Opera House appears to be closed at this time, unable to obtain 35mm prints for showings. Also, a correction to the caption under the photo atop this listing: the Opera House was not used as a bed & breakfast nor as a bar or library. The owners of the Opera House also own the county’s former jail in Aledo. They renamed it “The Slammer” and had a restaurant/bar as well as a B&B (where guests could room in one of the jail cells).

Now reopened on a weekly basis. Showing films on DVD until a digital system can be installed.