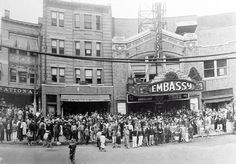 The Embassy Theatre was built around 1925. This was my “home” theatre, good for a multitude of cartoons, newsreels and a double feature every Saturday…all for about 35 cents!

The former lobby was renovated into stores. The theatre’s auditorium stood empty for many years until it was demolished in October of 2005.

My friends and I went to Embassy every Saturday afternoon for the horror matinees. Sometimes there’d even be a triple feature and live shows. It was a great theater with a big lobby and a balcony (usually closed). I can still hear all the kids screaming at the “The Tingler” in 1959!
One raining Saturday in 1962 there was a line around the block for “The Three Stooges Meet Hercules”. The list of movies I saw there would go on for pages. Main St in Orange & East Orange was a great place then. People went there to shop, and there were three theaters: The Embassy, the Palace, and the Ormont. They torn down the Palace a few years ago, the Ormont is now a mosque, and the Embassy is there but in some other kind use. The marquee is gone.
But the Embassy lives on in my mind, a place where I remember my best friends and family having a great time. This is a great web site. I thought I was alone in remembering these wonderful lost theaters.

The curtain finally falls on Orange’s Embassy Theatre
Friday, October 28, 2005
BY KEVIN C. DILWORTH
Star-Ledger Staff
One of Essex County’s last great movie palaces of yesteryear — the long-closed 2,073-seat Embassy Theatre on Main Street in downtown Orange — is being demolished.
Chunk after chunk of brick, mortar, steel and assorted metal, plasterboard and seating are being ripped up and carried out by workers razing the rear portion of the elaborate theater.
After years of failed attempts to get someone to transform the circa-1925 movie house into a multiplex cinema, a retail center and a small professional theater, nothing materialized. The decision was made to raze the structure and create a much-needed parking lot for Orange’s thriving Main Street, Dennis Monasebian, the property owner, said yesterday.
Like many other big movie houses of the past, “it was very attractive, but it became functionally obsolete,” said Monasebian of Armonk in New York’s Westchester County. “With nothing else to do with the property, we just had to take it down.
"The trouble is that buildings like this that were built 70 or 80 years ago don’t work anymore, unless they are in a densely populated area, like Manhattan or Newark,” Monasebian said. “It’s kind of a shame. The inside was beautiful at one point.”
The Embassy’s two huge crystal chandeliers are long gone. One is now at the Highlawn Pavilion restaurant on Eagle Rock Avenue in West Orange — as is the mural that towered above the balcony section of the movie house.
The marquee above the theater’s original entrance at 349 Main St. was taken down around 1990. Monasebian said he has the Embassy’s 3-by-12-foot sign and two original movie projectors. The Shannon & Nesbeth Hair Studio and Orange Unisex Nails — two separate storefronts — now occupy the space that once served as the Embassy’s elongated entranceway and concession stand.
For the past week, those passing by the demolition site — on the South Essex Avenue side of the building — have stopped by to share personal memories of the movie house, Monasebian said.
“Because this was the only theater in Orange, everyone who was a certain age went to see movies here,” Monasebian said. “Many people have stopped by to point out a spot in the theater where they had their first date and where they shared a kiss. It’s been very entertaining to hear all that.”
The building closed sometime in the mid- to late 1970s.
Orange resident Anthony Monica of Lincoln Avenue said he fondly remembers going to the Embassy as a child in 1948 to watch films such as “Abbott and Costello Meet Frankenstein” and “Abbott and Costello Meet the Invisible Man” in 1951.
“A great attraction there was the vending area, where they sold everything from popcorn and Jujyfruits candy, to licorice and (ice cream) bonbons,” Monica recalled. “The other good thing about the Embassy was that they never went to X-rated movies there. They always showed family-oriented films.”
In 1952, the Oranges, Maplewood and Livingston had 13 theaters that lured moviegoers with the latest films of the day.
Today, only the 1926-built Maplewood Theatre, across the street from the NJ Transit rail station in Maplewood, remains as a first-run film showcase. It closed in 1985 and later reopened as a multiplex.
In East Orange, residents and officials are awaiting the long-delayed grand reopening of the Hollywood Theatre on Central Avenue, where a $1 million-plus renovation has led to its transformation as the five-plex Hollywood Cinemas.
Following is a list of the 13 movie houses that operated in the Orange area a half-century ago. Some have been converted to other uses. An asterisk denotes the building was demolished.
The Ampere Theatre, 237 N. 18th St. in East Orange
The Beacon Theatre, 129 Main St. in East Orange
The Cameo Theatre, 117 S. Orange Ave. in South Orange
The Colony Theatre, 21 E. Mount Pleasant Ave. in Livingston
The Embassy Theatre, 349 Main St. in Orange
The Hollywood Theatre, 634 Central Ave. in East Orange
The Lido Theatre, 315 Washington St. in Orange
The Maplewood Theatre, 155 Maplewood Ave. in Maplewood
The Ormont Theatre, 508 Main St. in East Orange
The Palace Theatre, 4 Main St. in Orange (with a portion in East Orange)*
The Pix Newsreel Theatre, 139 Main St. in Orange
The State Theatre, 582 Valley Road in West Orange
The Windsor Theatre (first known as the Llewellyn, then in 1936, for one year, as the Edison), 250 Main St. in West Orange
Kevin C. Dilworth covers East Orange, Irvington, and Orange. He may be reached at kdilworth@starled ger.com or (973) 392-414.

Picture from after the closing, dated 1981.

Sad looking photo of the marquee.

Too bad this movie palace could'nt be saved. Every Main St. needs a brightly-lit movie marquee. Although Orange has a lively commerical strip, it’s somewhat forlorn without the Embassy.

I went there all the time in the 1950s and 60s. We lived in West Orange, but my dad had a store on Main St. in Orange, and was friends with Adolph Finkelstein, the Embassy’s manager, so we didn’t even have to pay the meager admission fee.lol I remember seeing Jerry Lewis movies there, “The Geisha Boy,” among others. I also saw westerns, Elvis Presley movies, and all the major films of the day, sometimes alone or with my brother, and sometimes with my parents. I f I remember correctly, when you walked through the lobby, you had to turn right to walk down the aisles of the theater toward the screen. It is sad that this grand old theater did not survive. It would have made a great concert venue ala the Wellmont in Montclair.