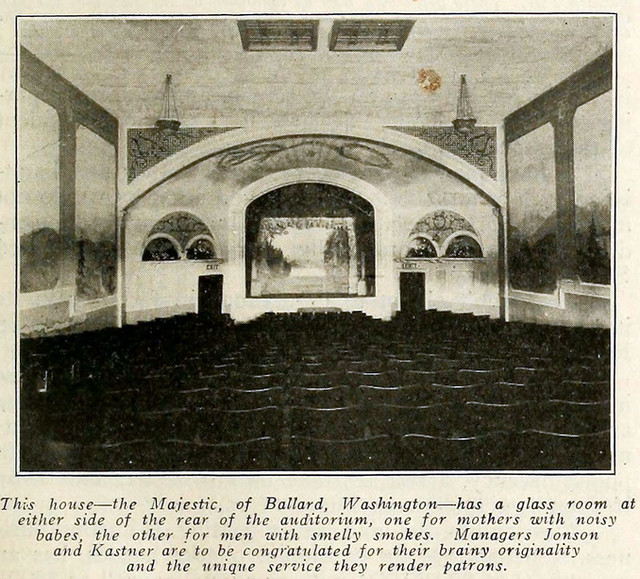 The Majestic Theatre opened in 1915 seating 1,000. It was located in the Ballard neighborhood. In 1922 the theatre was remodeled and a 2/4 Robert Morton organ installed. It was given the new name of the Roxy Theatre in the early-1940’s. In 1949 it received a remodel by architect B. Marcus Priteca with the seating capacity reduced to 465 and a new name, the Bay Theatre.

When the theatre closed in 1998, it had the distinction of being the Northwest’s oldest operating movie theatre. A local businessman bought the theatre in 1998 with the intention of re-opening the Bay Theatre, but it couldn’t pass fire inspections and was demolished.

In the summer of 2000, a new theatre was built on the site and named the Majestic Bay Theatre.

Actually, the Bay had seating of about 300 in a very narrow space.

“The Bay — which has been a Ballard landmark since 1915 and has laid claim to being the oldest continuously operating theater in the country — has not really been preserved.

It was so structurally deteriorated that the developers found it impossible to renovate. It’s essentially a brand-new, $5 million triplex in the same location, with all the amenities of the new millennium theaters, including stadium seating, a state-of-the-art sound system and computerized ticketing (major credit cards accepted).

But the new theater is also very much an architectural tribute to the old one and a kind of museum of the kinder, gentler moviegoing experience of the past.

Owner Ken Alhadeff told the P-I last month that his intention was to ‘build the nation’s finest neighborhood theater — a theater with a soul.’ In a sense, he’s betting on a high-touch reaction against the gigantic megaplexes that have now taken over the movie-exhibition business, to the point that the big chains now are closing down their less profitable multiplexes with only three, six or eight screens."

The New building is actually very nice. It was built to high standards and has a classy look that tries to mimic some of the style of classic movie theaters. It’s a shame they tore down the old theater, but thankfully they put a lot of thought and care into the new one.

The idea of still using an elegant waterfall curtain in front of the screen should be used more often in new theatre construction. The MB does just this. It is the most beautiful new theatre in Seattle along with the Cinerama downtown. They have a nice curtain too.

A brief item in the May 7, 1949, issue of Boxoffice said that B. Marcus Priteca had been the architect for the $50,000 remodeling of the Roxy Theatre into the Bay Theatre. The seating capacity of the Bay Theatre was 465.

The new Majestic Bay Theatre has its own Cinema Treasures page. See the earlier comment by kateymac01 on May 6, 2005, quoting the newspaper article which says that the developers were unable to save any of the original Bay Theatre because the structure was beyond salvaging. If an old theater is demolished to make way for an entirely new building on the same site, the new theater will usually get its own CT page.

This 1918 photo shows the original Majestic Theatre in the background.

I notice that the caption of the 1916 auditorium photo uploaded by CharmaineZoe says that the Majestic had a cry room. That’s the earliest instance of that particular convenience I’ve seen yet.

I was in the Bay only once around 1980’s. It was in bad shape then but I think it had doric or ionic columns on each side of the proscenium. It had classical lines and was a little campy but still stylish. Too bad it could not be saved but the new Majestic Bay is lovely and worth it all.

Just visited this great cinema last weekend. Great photos in the lobby and a nice candy counter. The only thing they need is to replace the white lights that shine down on the semi blue curtain and put in blue bulbs. The neon outside was great.