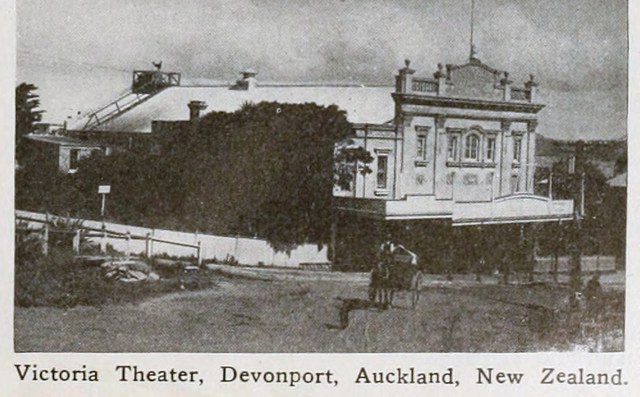 The Victoria Theatre is the oldest surviving purpose-built cinema in the Southern Hemisphere. It first opened in 1912 with 965 seats. The Victoria Theatre Trust have now purchased the building and renovated to bring it back into the film business, as well as running live theatre. It re-opened on 26th October 2010. A fourth screen with 30-seats was added in 2019.

The Vic originally opened on 26 October, 1912; I have a photo showing a group of people holding up a banner which includes the date.

There is some confusion because of a fire in 1924; the roof, the projection area and part of the interior were rebuilt, which took about a year. Films were shown at an alternate site until repairs could be made. Also, there is a chair from the original theatre still being stored in the theatre building. If the fire had been complete, I’m pretty sure chairs wouldn’t have survived.

lostmemory, I have been researching and writing a history of The Vic for months. It’s to be used as a fundraiser if I can come up with the cash to have it published. If you have info, I would appreciate it if you would forward it to me at It would be really embarrassing to spend my savings account to have a fundraiser published and be wrong!

LostMemry, I am looking for further info and would like to get your input but you list no e-mail address or other contact info. Please e-mail me with any info you have.

Hi over the last couple or so years we have added Cinema 4 with 30 seats, replaced 100 seats with larger more comfortable seats in Cinema 1 and improved the flow and number of seats in our cinema 3 to 132, an overall increase to 386 seats. please also note the correct link to our website is www.thevic.co.nz

I feel for all cinema operators, distributors, studios and all associated professions that are affected by the pandemic. It’s been an extraordinarily difficult time and we count ourselves lucky to be able to screen films on a daily basis here in Auckland City.