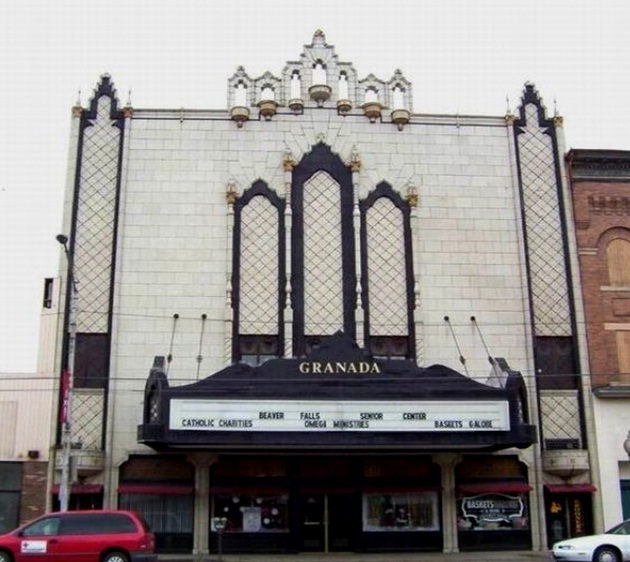 The Granada Theatre first opened in 1931, and was a luxurious Atmospheric style theatre in the Spanish-Moresque style. Michael J. DeAngelis served as architect for owner Archie Fineman, who also operated theatres in Pittsburgh (about 30 miles southeast of Beaver Falls).

Closed in 1960, the building stood empty for 13 years, before being converted into a mini-mall. The Granada Theatre was offered for sale at $119,000, probably a small fraction of its original cost.

The Granada Theatre was demolished in April 2010 and a medical center has been built on the site.

Below is Elaine Savoldi’s reply to me in regards to the Granada Theatre. Elaine is based in Beaver Falls PA which is about 20 minutes from Beaver PA where the Granada was located.

I am also saddened by the scheduled and certain demise of the Granada Theatre. I had the property listed for a time and that is why I put the information on Cinema Treasures, in the hopes that someone who would be able/willing to restore the theatre would discover it. I went so far as to send packets of information on the theatre with someone who attended a theatre convention in Las Vegas.

What also hurts is that my company, Town Center Associates, is heavily involved in downtown revitalization. Indeed, the Granada was on the waiting list to be put on the National Register of Historic Places, but none of the owners, nor the community, stepped forward to make sure that this very rare atmospheric theatre would be preserved. Restoring a theatre is an effort that needs community support.

I am not sure how I can help you because the process has already been started and I doubt can be reversed. Perhaps you could seek out other theatres in the country that still have a chance at being saved, and place your efforts there.

Is anyone else having difficulty viewing the photos that have a “pool” number at the end? Yet the"cinemasignage" ones can be viewed?

The pool links work for me, too. Flickr was probably having temporary indigestion.

Patsy: Check the Carlisle Theatre page. I posted a new link you’ll like.

Joe: I like and I am pleased! Thank you!!

Found this set of demo photos through another flickr photographer.

Another sad story,another one gone.

A book called “Beaver Falls: Gem of Beaver County,” by Kenneth Britten, says that the Granada was not new construction, but an extensive remodeling of the older New Colonial Theatre. This book is published by the Arcadia Publishing Company, and the author is (or has been) a member of the Beaver Falls Historical Society (Google Books preview.)

It says that the Colonial Theater was built in 1911, that it originally seated 300, and was renamed the New Colonial after being briefly closed in 1917. It was taken over by a Pittsburgh showman named only as S. Goodman in 1928, and subsequently remodeled and renamed.

I’ve been unable to find an S. Goodman mentioned in any of the trade publications from the period, such as The Moving Picture World. However, a snippet view of a 1929 issue of the trade publication The Lather mentions that architect Michael J. DeAngelis was designing a $500,000 theater project for Archie Fineman in Beaver Falls.

It does seem possible that at least parts of the 1911 Colonial Theatre building were incorporated into the Granada (the lower parts of the side walls, for example, might have dated from 1911,) but if Fineman did spend $500,000 on the project, the interior must have been quite opulent. The cost was well above the average for theaters of that size built at that time.

This theatre is marked as closed and it has been demolished.

Again, this theatre should SADLY be noted as demolished.