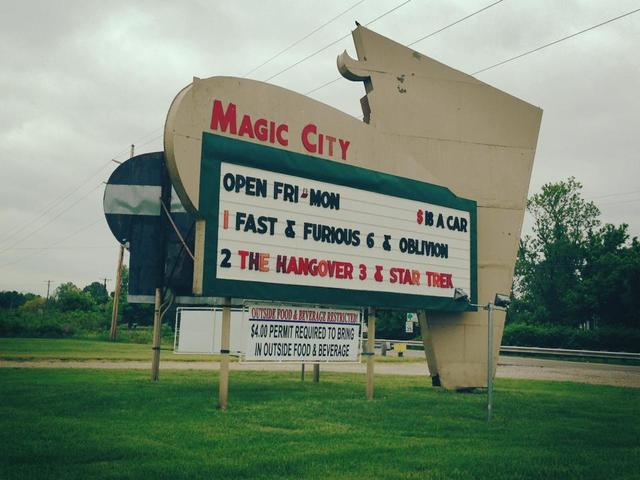 How did the ‘Magic City’ Drive-In get its name? Barberton, OH became known as the ‘Magic City’ because of its rapid population growth during its formative industrial years. This was a time of waves of immigration from eastern & southern Europe. It 1891, when Barberton was incorporated, the scattered farms that had originally characterized the landscape were transformed into a fledgling city of 1,800. When an Akron Beacon Journal reporter revisited Barberton in 1893, he noted that since 1891, it had grown so quickly that it appeared to have grown by ‘Magic’.

The Magic City Drive-In was opened on June 22, 1950, screening the 1949 western “South of St. Louis” with Joel McCrea, Alexis Smith and Zachary Scott. The second feature was the 1949 comedy “Master Minds” with Leo Gorcey and the Bowery Boys. The new airer was opened by Lou Ratener and Vince Lauter, dba Magic City Drive-In Theatre Inc. and Ohio Theatre Service. The Magic City is well known because of the theatres iconic marquee. It shows a genie coming out of a brass lamp, like Magic!

OTS was a buying and booking service for independent exhibitors started by Ratener & Tony Stern. Lou Ratener in 1950 would also purchase the Montrose Drive-In. Starting in 1965, Co-Operative Theatres of Ohio Inc. would be the buying and booking agency for the drive-in and still continues to this day. On November 27, 1967, the Magic City Drive-In was sold to Sam, Jay and Don Schultz, dba Jaydon Amusements Corp. and Selected Theatre Management Corp. from Cleveland, OH. On June 23, 1978, the Magic City Drive-In reopened as a twin theatre. In 1980, Jaydon Amusements Corp. leased the drive-in out to Gary Grieve. In the mid-1980’s, Selected Theatres was selling all of their drive-in properties. At this time they were getting out of the theatre business. On January 4, 1985, the Magic City Drive-In was sold to Gary Geive. Gary Greive and Jeff Davis own and operate the Blue Sky Drive-In and the Magic City Drive-In. You can still see movies screened under the stars at these two classic airer in the Akron, OH area.

Went to see the second Flintstones movie here in the early 2000’s. Real nice place, although the 2nd screen is small. Good eats.

In 1956 it parked 400 cars and was owned and operated by OHIO THEATRE SERVICE.

Reminds me of the COMMERCE drive-in in Commerce, Georgia it is on CT go read about that TRIPLE or the FUN-LAND in Tampa it is on CT. How can you watch a flick when you can SEE the other screen. Well, they are called “PASSION PITS”.

Was just out in Ohio this past week. Did not get a chance to go to this drive-in because it rained every night. Newspaper ads in the Akron-Beacon Journal stated that this drive in has all digital projection.

June 22nd, 1950 grand opening ad in photo section. The State in Cuyahoga Falls also opened on the same day and the first listings for the Auto Voice Drive-In appeared on June 23rd.

From the Magic City’s About Us page: The Magic City Drive-In was built and opened by Vince Lauter (West Theatre) and Lou Ratener (Montrose Drive-In) in 1953 as a single screen drive-in. It was sold just a few years after opening to Selected Theaters who added a second screen in the mid seventies. Gary Greive purchased it in 1980. Capacity 700 cars. Two screens which both face west. There is a special projection booth at the back of the lot to handle screen 2. Radio sound.