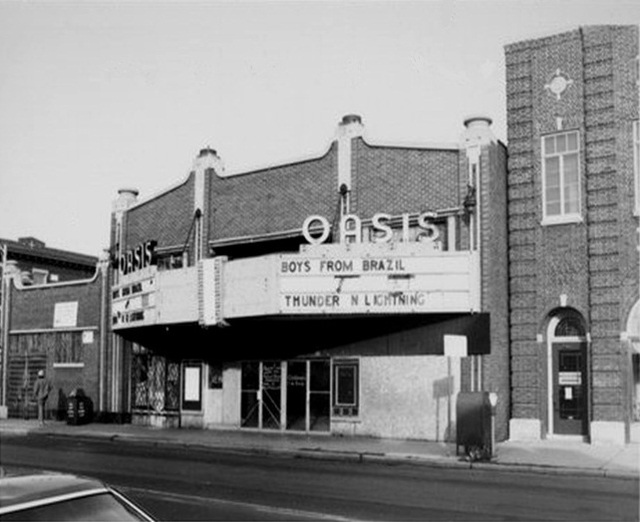 Opened as the Savoy Theatre in 1914 on Center Street between 26th and 27th Streets, this theater was renamed the Oasis Theatre by the 1960’s.

In the late-1960’s, the Black Panthers protested the Oasis Theatre, for what it felt was the movie house’s racist policies towards African-American patrons. The Oasis Theatre closed around 1978. The former theatre later housed a bar, and is now home to the Wisconsin Black Historical Society.

Located at the busy intersections of 27th Street, Center Street, and Fond du Lac Avenue, the SAVOY THEATRE was a very popular movie house. For many years the Savoy was part of the Saxe circuit and even in the 50s long after the heyday of the Saxe Theaters, the Savoy would be listed in The Milwaukee Sentinel as Saxe’s Savoy
In the 40s and 50s the Savoy changed its programs trice a week, on Fridays and on Tuesdays. The Savoy often had original programing of films showing independent releases and British imports not shown in the chain theaters. When the remodelled Savoy became the Oasis in the 60s, the programing became similar to that of other theaters. During its final days it regularly featured Kung Fu films.

The OASIS never had an Egyptian decor; the reason for the name is unknown. It was a typical box beams-and-pilasters decor, that was not materially remodeled when it changed names. It is in a decaying neighborhood and now is a tavern/bar.

This building is currently not in use.

That Golden Toned Barton Theater Pipe Organ was a 2/, manual/, keyboards/, shipped from the Barton factory in Oshkosh, Wisconsin in 1926 to the Savoy Theatre. Does anyone know what happened to organ?

Google Street View is way off. The former theatre is now part of the Wisconsin Black Historical Society.

I grew up on 36th and Locust and usually every Sunday I’d walk down to the Oasis and see anything that they were showing, usually staying through several shows. Saw Breakfast at Tiffany’s, Swiss Family Robinson, so many more. I don’t remember the building being anything special. Probably took my life in own hands walking up and down Fond du Lac ave.

This closed later than the 1975. Read the marquee. The Boys from Brazil (one of my favorite movies BTW) was released in 1978.