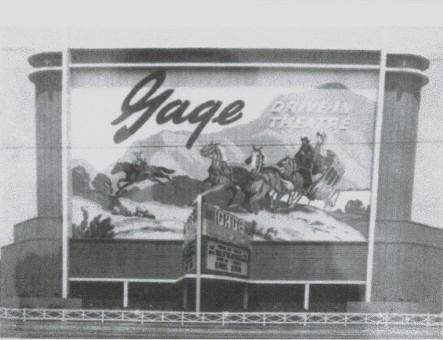 Located in the City of Commerce near Bell Gardens in southwest Los Angeles. The Gage Drive-In opened on April 12, 1949 with Glenn Ford in “Return of October”. It was closed in September 1977 and was soon demolished. It had a capacity for 900 cars.

This is from Boxoffice magazine in March 1949:

HUNTINGTON PARK, CA-The 1,000-car Gage Avenue Drive-In now being built here by Pacific Theaters is expected to be completed early in April. Occupying a 15-acre site, the new open air theater is being erected at a cost of $400,000.

The front of the drive-in will be featured by a large mural of a stagecoach drawn by four horses in front of a picturesque mountain background. A seven-story screen tower is being fabricated of structural steel. Another convenience will be a 100-foot concession bar.

Here is the mural mentioned above:
http://tinyurl.com/n4gv8v

Boxoffice of July 31, 1948, said that C.H. and William Glenn Balch were preparing plans for a drive-in at Bell Gardens for Pacific Drive-Ins.

As the firm of Balch & Balch had been dissolved a few years earlier, and William Glenn Balch had formed a partnership with Louis L. Bryan in 1946, I’m not sure if the inclusion of Clifford Balch in the notice was not just an error by somebody at Boxoffice who didn’t know about the elder Balch’s retirement.

In any case, William Balch had already designed other drive-ins and was almost certainly the lead architect on the Bell Gardens project. Balch & Bryan had several drive-in projects underway in 1948.

Now a housing development tract, the outline of which is fairly close to the boundaries of the old drive-in.

The city should possibly be changed to Commerce, CA. I found an archive from the City of Commerce library/UCLA digital archives showing its demolition. Google Maps lists the address as Commerce as well. http://ow.ly/pylZj

Opened on 12/4/1949 with “Return of October”. Closed in 1977. Demolished a few weeks after closure. Site now an industrial park. Mural with a Spanish horseman on back of screen.

The Los Angeles Times, in articles and advertisements, placed the Gage in the City of Commerce in 1977, and technically the city briefly owned its land. In August that year its former owners agreed to sell to the city. The Gage was still showing movies in September, then its land was sold by the city in October, and its screen was pulled down by the first week of November.

Boxoffice, Oct. 22, 1973: “A fire at the Gage Drive-In in Bell Gardens caused an estimated $30,000 damage recently. Officers investigating the blaze at the ozoner, located at 6805 East Gage Ave., tentatively cited arson as the cause. They reported finding “considerable evidence of flammable liquid being purposely spilled and ignited” at the site of the fire. Showings at the Gage were continued as usual, despite the heavy damage.”