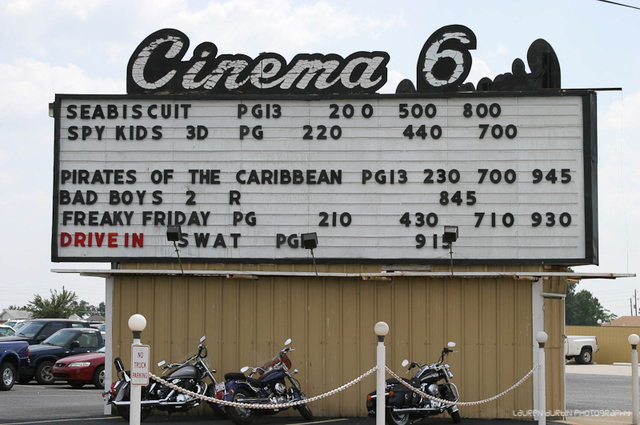 At one time there were several drive-ins in McAlester and the vicinity. The Cinema 69 Drive-In was the last to be built (1973). It was built in conjunction with an indoor cinema on the same premises. As the indoor cinema grew into a quad, a lot of the drive-in space was taken up. By then the drive-in qualified as the smallest operating drive-in in Oklahoma. Due to local curfews the drive-in went from double bills to single bills.

Cinema 69 was the only indoor and outdoor theatre sharing the same projection booth and concession stand. Audio at the drive-in was provided over FM radio.

It was closed in 2004, and has been demolished, apart from the screen which still stands in October 2021.

I spoke to the owners, and they’re aren’t planning on reopening this drive-in this comming summer. They’re going to use it for parking as they expand their “Monster-plex” next door! What a crime! I encourage drive-in lovers everywhere to speak up. Drive-ins are a piece of Americana. They deserve to be saved! We only have 7 left in the entire state of Oklahoma.

I work in this little theater it is always clean but the mnagers are some of the rudest people you will ever meet. It is like a mega plex in the two newest theaters the drive in is closed forever. and we are opening two new screens.

We’re to late for this one. It’s gone. It’s now a parking lot and a “Monster-plex” addition. What a shame!

Cinema 69 and Cinema 69 Drive-In were one and the same. United Artist Theatres originally opened this complex as an indoor twin cinema with an adjoining drive-in. In the early 1990’s UA sold this complex, and it was eventually expanded to six indoor screens. As listed above, the drive-in is now only a memory.

Miss Melba Toast, UA had many indoor-outdoor drive-ins-cinemas in the NYC area. They were marketed as “all-weather drive-in”. All are now closed now.

The status of this drive-in should be updated to closed/demolished.

The screen itself was still up as of today (new picture in the photo section). “Mostly' demolished, I guess….