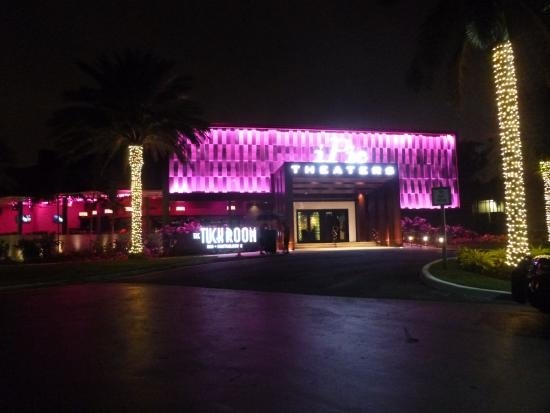 Located in the Intracoastal Mall, the Intracoastal Cinema 8 was opened by General Cinema Theatres. It had a seating capacity of 1,990 in its 8 screens. It was later operated by Sunrise Cinemas. It presented the best in first run commercial, art, foreign and independent films.

Each theatre featured state of the art digital stereo sound and all auditoriums were handicap accessible.

The Intracoastal Cinema 8 was also the venue for the annual Israeli Film Festival. It was closed in 2014 and the building was gutted internally.

It was taken over by iPic Theaters and remodelled into a luxury 8-screen theatre, with auditoriums seating between 50 and 90 moviegoers. It reopened December 4, 2015 as the iPic North Miami Beach Intracoastal.

The Intracoastal 8 was originally a General Cinemas (GCC) location, until it closed and sat dormant for about four years. The GCC locations were mostly excellent, although, as with many of their 8-plexes, four of the auditoriums had stereo capabilities, while the other four were monaural. Since the Sunrise Cinemas chain reopened this former GCC location and others, it has made no attempt to upgrade the audio, and so four of the houses are still in monaural. Tens of thousands, if not more, in post-production dollars are spent in mixing and perfecting multi-channel soundtracks, and therefore, exhibitors should respect the art of multi-channel audio presentation by presenting it as such.

The GCC locations, in my opinion, featured the best projection in town, and had perfectly flat screens with durable-looking movable masking. The Intracoastal 8 showcases a fairly pleasing selection of films, balancing commercial and limited releases, and is overall a good venue, conducive to a more cinematic experience than some of larger, more impersonal megaplexes in the area. My recommendation, though: see a film in one of the four larger, stereo-equipped houses, or not at all.

a part of ‘The Sunrise Cinemas’ which are great for indies and foreign film.
Recently saw ‘Apres Vous’ with Daniel Autueil here.

I just combed through the text on this page and could not find a single instance in which “Intracoastal” was mispelled, so I can’t see the relevance of your post.

some scans of theatre tickets, including one for GCC Intracoastal, it was for Whats Love Got To Do With It, all i can remember is it was packed and hot, people were walking the aisles with babies, and i dont think there was any air con just huge extract fans in the ceiling
http://www.flickr.com/photos/woody1969/3456462789/

This theater is now being managed by Frank Theatres; the new official website is: http://www.franktheatres.com/Home.aspx

The actual address according to their website and Google Maps is 3701 NE 163rd Street, North Miami Beach, FL 33160.

The theater is operating yet is still not listed in the Miami Herald’s movie times though it used to be under previous owners/names.