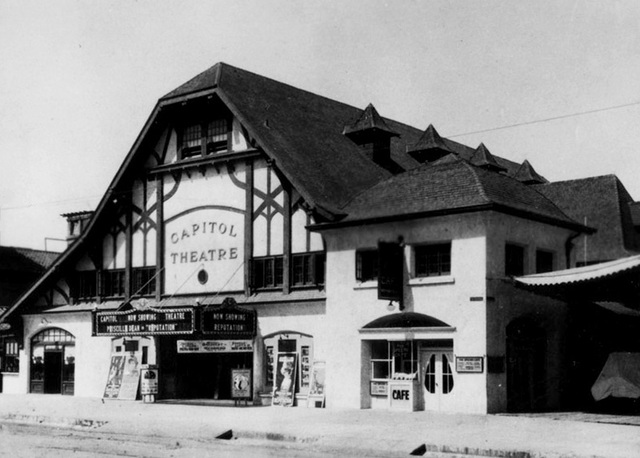 Opened in 1912 as Fancher’s Capitol Theater as a mixed film and vaudeville house. The architect was John Parkinson, who designed a three storied building that resembled the half timbered houses seen in Germany. The auditorium and stage portion was built on wooden pilings above the sand and was located on the El Paseo beach amusement zone area of Redondo Beach.

There were 600 seats on the main orchestra floor and 100 in the small shelf balcony. It was a primitive building with the roof trusses and beams visible to the audience in the auditorium. A Wurlitzer theatre organ Opus 307, style 135A was shipped to the Capitol on 13th May 1920.

The theater was taken over by Gore Brothers of Los Angeles in 1919 and in 1920 the company was re-named West Coast Theaters.

The Capitol remained the major theater in Redondo Beach until the opening of the Fox Redondo in February 1929 when the manger Thomas Quinn tranferred to the new theater and the Capitol went over to second runs and westerns.

Any further information on the fate of this building would be appreciated.

The Capitol in Long Beach is listed on Cinema Treasures under its final name, the Tracy.

I had a feeling that it was somewhere here. Thanks.

This is a photo taken in Redondo Beach in 1910. The building at the far end resembles the Capitol in the above pictures, but 1910 would predate the construction of the theater. The USC photo may be misdated:
http://tinyurl.com/mfr32

ken: I’d say that’s definitely the same building. As the Capitol opened in 1912, and the USC archive photo is dated only as ca1910, the “circa” could surely cover 1912, the year the Capitol opened. The Silent Era and L.A. Library photos show that there was some remodeling done to the ground floor, though. Maybe the building was originally built for another purpose, and the theatre was put into it a couple of years later.

I can’t map out 127 S. El Paseo in Redondo Beach. I get the feeling that the street was obliterated during redevelopment. As many times as I’ve been through the area, I’ve never seen a building resembling the Capitol. Mu hunch is that it has long been replaced by condos.

I am looking for information on Mike, Abe & Issie Gore.
They opened many of the first theaters in CA. My father
Isreal Gore died when i was 4 and my mother died I was 19. All
family records were stolen and I know nothing about
my family history. Would love any help any one can give.

If you look at some of the entries for the downtown theaters, including the Main, Banner and others, you will see quite a few references to Gore theaters at the beginning of the twentieth century.

Gore Brothers: To the person that is looking for information on Mike, Abe and Issie Gore .. my grandfather was Sam Gore, your father’s brother. There was also Herman, Jake and Sophie and I think a Charles. My grandfather died in the 30’s but my sister and I know a little bit of the history from our mother. She used to make comments about her 31 first cousins, of which you must be one. Please email me at or let me know how to get in touch through this website.

Here is a postcard:
http://tinyurl.com/yceswb9

The unique structure was built in 1907 at a cost of $30,000 by Frank Dorrington as part of the waterfront attractions commissioned by Henry Huntington. The building was originally called the “Casino”.