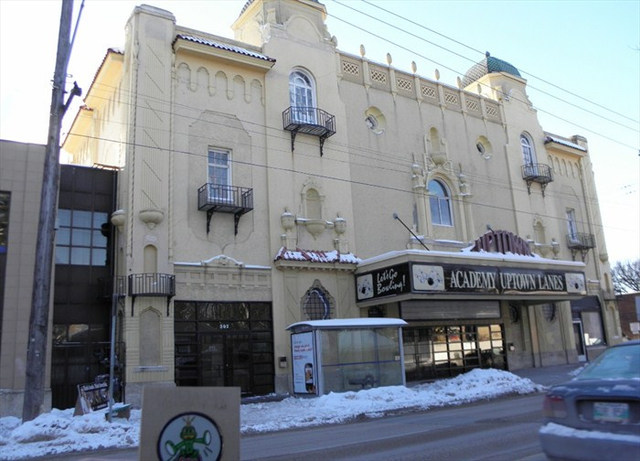 Opened on 24 Dec 1931 and the architect was Max Blankstein. The interior of the theatre was gutted in 1960 and was turned into a bowling alley which it still functions as today.

The Uptown was Winnipeg’s only atmospheric theater, designed by a local architect. Little of it’s former splendor is evident as the interior was totally gutted in the conversion to a bowling alley. The exterior however, remains as built in a Spanish mission style with pinkish stucco, twin cupolas, niches and wrought iron railings. The original marquee, minus attractions panels still has the original neon lettering proclaiming ‘Uptown’. Originally there were two small stores at either side of the entrance doors under the marquee. One of them was a snack bar that made great hot dogs. The other was used as an office or storage for the theater. Considerable detail went into finishing the interior to look like a Mediterranean village. The stucco and scored plaster theme was repeated on the interior false building fronts. Windows of the buildings along the side walls were back lit with amber lights while the side wall false balconies had persian rugs over the railings. The theater was a true atmospheric with deep blue ceiling pierced with twinkling stars to resemble the nightime sky. A Brenograph projector provided cloud effects, rising and setting moon and even a plane flying over. The only additional lighting (during intermissions) was a row of ‘port hole’ lights along the front edge
of the main balcony. The Uptown was a Famous Players neighborhood
house offering sub run double features along with Saturday matinee
fare. Currently it is still a bowling alley.

The address for the Uptown theater is 394 Academy Road.

Some of the original interior detailing can still be seen in the back of the bowling alley’s kitchen on the ceiling, and in the extended storage closets which were formerly staircases to the galleries before being renovated. It’s too bad more of the original architecture hasn’t been preserved, although the building does still provide a great atmosphere for bowling on both floors. Large photos of the building’s interior from when it was a theatre, and also of its original conversion to a 60’s retro bowling alley before its current renovation have been preserved in the main entrance for any interested.

Here is an August 1945 ad from the Winnipeg Free Press:
http://tinyurl.com/yqj67j

$23 for an hour of bowling? Yikes. Here is an exterior photo:
http://tinyurl.com/5lfw25