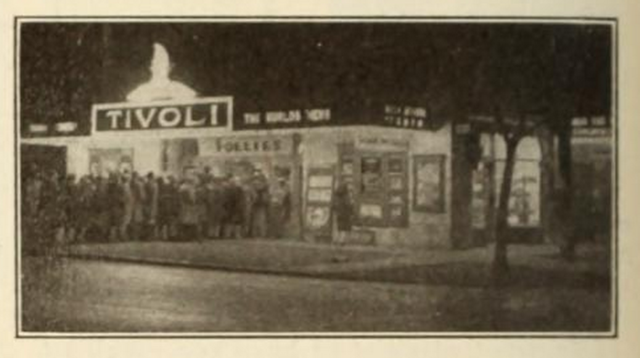 Located on the northeast corner of Maryland Street and Westminster Avenue. The Tivoli Theatre was one of several neighborhood theatres in the city operated by the Famous Players chain. It was opened on November 2, 1927 and a Casavant organ was installed. There was no stage house or orchestra pit and the organ console sat immediately below the screen on the auditorium floor. The interior décor was simplified Art Deco style.

The theatre was closed in 1958 and the interior was totally gutted in the conversion to a supermarket. A succession of food markets has occupied the building since then. The early-1950’s era marquee remains with the Tivoli name removed and is used currently to advertise weekly specials on the plastic end panels.

824 seats would seem about right as I recall. It wasn’t a huge house and I don’t recall if it had a balcony. I don’t believe it did. Local info says it closed in ‘58 and the organ was removed at that time and sold to a local baptist church, where it is still in use. The organ was unique in that it was built by a company not known as a theater organ builder (Casavant), although they are widely recognized for their church pipe organs. It probably makes sense that it was reinstalled in a church (with the chimes, but minus percussions apparently). The theater interior was never remodelled, although some changes were made to the front of the building (new marquee, sign, entrance doors and ticket booth and a stucco wash was applied over the brick front below the marquee). A new entrance was cut into the side of the building from the parking lot after the conversion to a food market.