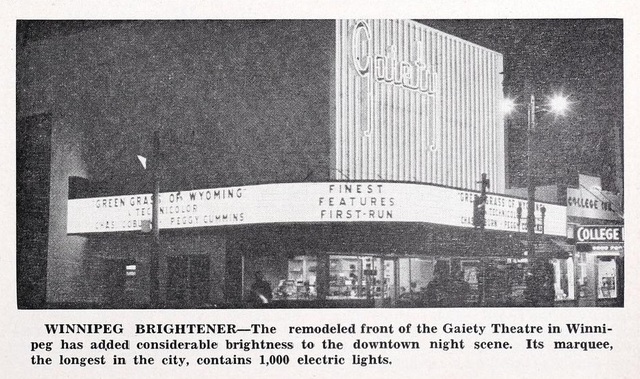 Built by Famous Players in 1912 as the Gaiety Theatre with seating for 750, it opened on October 26, 1912 with “The Brave Hunter”. There was no balcony but it had a raised rear section similar to today’s stadium seating. Elaborate plaster cornices and moldings around the ceiling perimeter were the main decorative features, along with large ornamental iron ventilator ceiling grilles. There was a central plaster cartouche above the proscenium.

Until the end of its days the name ‘Gaiety’ could still be faintly seen even though the raised lettering had been chiselled off and the medallion repainted. Walls were sectioned into framed panels inset with damask material surmounted by cartouches of classical faces surrounded by leaves and scrollwork. Wall sconces in the center of each wall panel down the length of the side walls provided the lighting.

It was a Famous Player theatre throughout most, if not all of it’s life. As the Gaiety Theatre it showed a mix of first run films deemed not worthy of FP’s more opulent theatres further uptown, move overs and occasionally double features.

For all of its life the theatre entrance shared space under the marquee with a retail store. Over the years the store was variously home to a bakery/candy shop, camera shops, shoe stores and boutiques.

The only major exterior remodelling occurred in the late-1940’s. The theatre façade was given a modernistic white stucco face with vertical red ribs, outlined in red neon. The previous rectangular marquee was replaced with a backlit white plastic one that wrapped around the corner onto Colony Street.

Originally the theatre had a unique vertical sign consisting of a rectangular revolving column with ‘Gaiety’ in different colored neon on each of its four sides. In the remodelling this was replaced with the name ‘Gaiety’ in raised neon letters against the façade. This in turn was replaced with others that proclaimed the then current name of the theatre.

As the Colony Theatre the theatre closed on January 2, 1986 with “Clue”. The building was demolished, along with that entire city block to make way for the eventual construction of One Canada Centre, headquarters of the Investors Group.

This May 1979 article from the Winnipeg Free Press calls the theater Colony Cinema:

A robber armed with a pistol held up the Colony Cinema on Portage Avenue and Colony Street just before midnight yesterday. Police refused to release other details early this morning, but it is believed an arrest has been made.

The theatre manager said a man entered through a secondary entrance and held up the cashier. The manager refused, however, to say how much cash, if any, was taken. This is the second robbery to happen at the Colony in the last two years. During the first robbery, the assistant manager was held up and bound. The manager said he was tempted to lock all the doors in the theatre to prevent future robberies, but he said that would be against fire regulations.