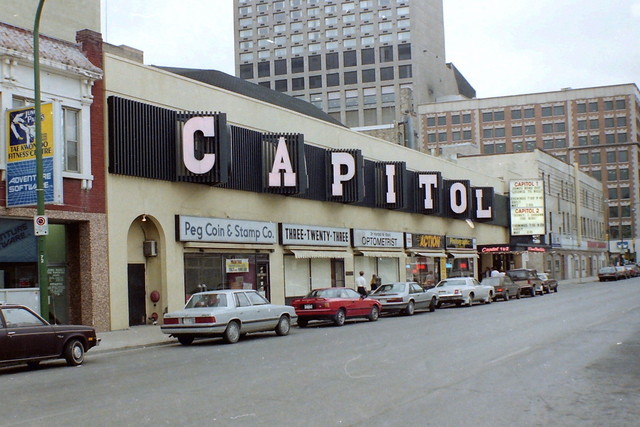 Famous Players' Capitol Theatre was the biggest single-screen movie theatre ever built in Winnipeg & the biggest in Manitoba when it opened in 1921 with 2,000-seats.

On June 8, 1979 the theatre was renovated and the Capitol Theatre’s balcony was converted into another cinema. Cinema 1 then contained 864 seats, while Cinema 2 had 426.

I can’t wait to see more of your pictures of the Capitol. I think it was much nier than the met, even after it was split, although, the Met has a beautiful facade.

If only the Capitol’s guts could be in the Met’s shell.

And, don’t chastise me, but I love the Met too, its just that I think the Capitol was much, much more beautiful and I think they went more for saving the Met because it was never split. And I can’t help but wonder what happened to the Cap’s chandelier (anyone have pictures of it?) or why the Met was never hacked up?

Heres a link to three excellent interior photos of the Capitol. ere

This theatre reminds me a lot of the Palace in Hamilton, which was also designed by Thomas Lamb.

Those photos show the Capitol as I remember it, not the hacked up horror after twinning. By 1978 (the year of the photos) all traces of the orchestra pit and organ are gone (except for the organ grilles) along with the large central chandelier hanging from the dome. Could the chandelier have been removed as long ago as the 50’s when the Cinemascope screen was installed?

Here is an April 1960 ad from the Winnipeg Free Press:
http://tinyurl.com/3gvb3h

I had just seen “The Two Jakes” at the Capitol 2 (which was the original balcony of the old single seat auditorium.) The crowd was sparse. I watched some of the credits while the handful of other patrons filed out. Whatever the movie was downstairs had already let out. As I got to the door on Donald, the usher, a young kid, said to me “Congratulations Sir – You are the last customer in the Capitol theatre. We’re closing the doors tonight.” And so they did – although the building stood empty for several years after that.

burningdust I would love to have a dvd of the video you took. My info is on my page. Thank you, let me know how much to ship if you are willing. My Grandfather used to work for Rothstein Theaters of Canada and booked all of the movies into this theater for many years. His offices were located in the Marlborough Hotel on the 2nd floor.

Sorry mntwister If your grandfather worked for Rothstein theatres it would be impossible for him to book any Famous Players Theatres as they had their own bookers that worked out of the Toronto head office!!

I stand corrected. I asked my mom, who is from Winnipeg and indeed he did not book for this theater. My mother worked at the Paramount and Universal exchanges in Winnipeg and as I said my grandfather, after working at Universal and RKO, went over to Rothstein Theaters. That’s when he was awarded the Canadian Motion Picture Pioneer of the Year (Hy Swartz).

My mom says we did go to movies at this theater,as we went from Minnesota to Winnipeg several times a year but I don’t remember as I would have been under 10 years old.