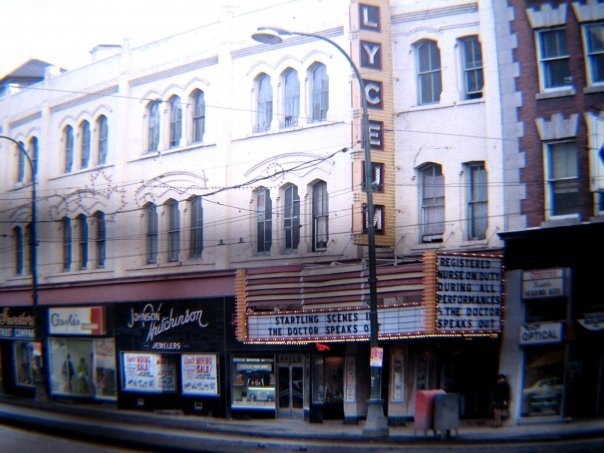 Opened c.1920. A 3 manual Smith unit organ is recorded as having been installed in October of that year. Initially, the Lyceum Theatre offered first run movies and by 1929 was operated by the Universal Pictures chain. It later operated as an independent house, competing against the Famous Players chain of theaters, of which there were several in the immediate area.

Little or no remodelling was ever done to the theatre, other than installing a concession area and replacement of all the seating in the early-1950’s. In later years it ran mostly double features. Eventually declining attendance forced it to close in 1968. It was demolished, along with almost the entire city block to make way for a Radisson hotel.

What about the Garrick, Metropolitan and Capitol? Are they still standing. Can’t believe that Cineplex Odeon only has Grant Park, I guess that will change now that they are taking over Famous Players.

Tim, the Garrick is closed and now part of the Ramada Marlborough hotel, currently a conference centre (theatre interior totally gutted for current use). Capitol, 1920, designed by Thomas Lamb, demolished summer 2003 after years of neglect (it could have been saved if someone had paid attention). Metropolitan, 1919, designed by C Howard Crane, closed and boarded up since 1988, under city ownership, but no one has come forward with a practical use for the property. Interior has some of the fittings remaining, (chandeliers, wall sconces and some seats),all other ornamental detail was painted over years ago, as well as any other fittings removed, including
film equipment. It’s in grim condition otherwise and it would take a ton of money to restore. They have, however, repaired the roof and installed electric furnaces as well as a security system.
Currently the city has two other theatres on the books; the 1914 Pantages Playhouse (fully restored as a performing arts centre)and the 1907 Walker aka Odeon, recently renamed Burton Cummings Performing Arts Centre, used primarily for performing arts, rock concerts, etc. All the film equipment was stripped from the premises when Odeon abandoned the theatre in the 1980’s. Ongoing renovations as money permits.

This theatre was owned and operated by Western Theatres Ltd., which was a 50-50 partnership between Famous Players and Richard Miles (originally his father Jack Miles), a Winnipeg business man at the time. Western also owned and operated the Airliner, Pembina and Eldorado drive-in theatres, the Downtown (formerly the Rialto) theatre, the Airliner Hotel and other businesses. It was Western that built the Northstar Inn (now the Radisson) on the site in 1968. That project suffered many setbacks which led to the breakup of the partnership, with Famous Players ending up with 100% ownership of the hotel.

GAR, do you have any idea when the organ was removed from the Lyceum and where it might have ended up? As I recall as part of the Northstar complex, now Radisson, a twin screen theatre was built which replaced the demolished Lyceum. It too no longer exists. Also, do you have any more info on the Rialto aka Downtown theatre? It should be added to Cinema Treasures.

Sam: I’m sorry, I didn’t know there was a pipe organ in the theatre even though as a kid I used to go there regularly. Also, I don’t have much knowledge on the history of the Downtown (Rialto), except the following:

I hope this helps.

Does anyone know if the Lyceum Photo Studio in Winnipeg, next door at 290 Portage Avenue, was affiliated with the Lyceum Theatre and the owners? Any history of the studio?
B.R.

No connection between the Lyceum Theatre and Lyceum Photo Studio.

Here is an August 1945 ad from the Winnipeg Free Press:
http://tinyurl.com/ywdqoe