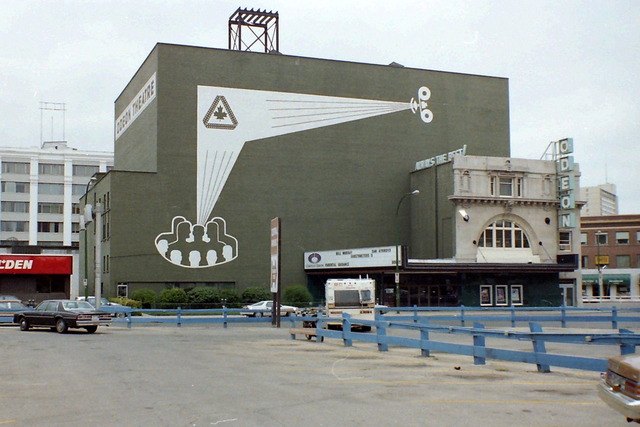 The 2,000-seat Walker Theatre opened in 1907 and was named for its owner, Corliss Powers Walker, who brought in live theatre, vaudeville, concerts, and silent films. The theatre switched to a movies-only format on November 2, 1945 when it was renamed Odeon and remained in operation until 1990.

In 1991, it reopened as a performing arts centre and is an official Manitoba Provincial Heritage Site.

After years of struggling, Burton Cummings, the lead singer of the rock group Guess Who, has become the theatre’s new benefactor. Cummings will begin donating a portion of the proceeds of his concerts at the Walker in order to pay down the theatre’s $1.8 million debt and fund future renovations.

In exchange for his aid, the theatre will be renamed the Burton Cummings Theatre for the Performing Arts after the singer who attended the former movie house as a child. The board hopes Cummings' name will help bring in additional grants and donations.

The Walker is a true gem, every performer who visits the theatre often comments on the beautiful venue. I have seen a few live shows from the first balcony and floor and was quite impressed. Despite the great size and architectural beauty of the venue there are still those who complain about the comfort of the seating. Of course when we have modern Cineplex buildings like Silver City it’s expected the seats obviously don’t compare to plush high back ergonomic seats. Quite an unfair comparison.
The walker and its seats are all part of the experience, something we are lucky to have and something I appreciate.

Winnigirl: I have been told the wooden pews on the last balcony are referred to as “the gods”.

Sam_e: As far as outward appearances I agree, I have not seen any repairs / restoration to any part of the building in the last 3 years.. Another disappointment. There are some critical things that should be addressed in order for the building to remain, as well some not so critical, like the exterior of the building. It would be nice to see the paint job restored; I saw some pictures from back in the day shortly after it had been painted by Odeon and it looked really sharp. Of course before any of that could happen the brickwork / windows should be repaired. And as you can imagine this would be a very large expense for a more or less “cosmetic” upgrade.
Though it would help cut down operating costs.
(Some of the windows can’t even close properly or are completely broken) :(

Hello all!
This year is proving to be a busy year for the Walker!
When you have a moment go to ticketmaster online and check out the great line-up of shows taking place at the theatre.
With such a great Variety of performances there’s something for everyone!

Of course the local promotions people find no challenge at all in filling the theatre so good luck at the box office. With some of the big names playing on stage the Walker will see crowds comparable to those back in the Walker/Odeon glory days.
cheers!

Yet Another Reminder:
This Saturday Morning Tickets go on sale for “The Strokes”!

Cheers to all who attended the celebrations last evening at the Walker! A good time was had by all!

Better yet the funds raised from the show in addition to selling the parking lot made enough to pay of the theatres debt!

This is VERY good news for the Walker (burton cummings CPA)

I too was at the Walker Theatre 100th, and was very surprised at the production, i find the only thing missing, that i would have done was a short show of images from records or back room shots of any of the dressing rooms, basements, and just some of the stuff that people wouldn’t normally see, my only problem that night and depending on where one was sitting was when during intermission, i went to the washroom and found that the wait for the lower floor would have out lasted me, so i thought, maybe the upstairs are less crowded, sure enough they were and i got in with out much wait, the only blip on this was that no one told me that one had to have his ticket to return to my seat on the lower floor, But that was the only problem that night, i felt bad for anyone that didn’t get a chance to wander about the place, And for having provide some back ground photos of the place, I’m sure that they could have done a bit of a photo show on the work that was done on it as well as some behind the backstage and dressing room shots as well as places most people don’t get to see. I for one would be happy to offer my services as a photographer to cover the place such as i have on my other three theatres, of course minus any costs such as film. Other than that it was a good time and im glad i went, had great seats third row from the stage on the left of the stage, a little cramp, would have hated to been a large person trying to sit there.

There is an interior photo on this page:
http://tinyurl.com/5vgyl6

Howard Colton Stone is recorded as being an architect with offices in Montreal. He was working in that city during the period between 1900 and 1924 which fits as far as construction of the Walker theatre (1906/07) is concerned. Unfortunately the Montreal site only lists his accomplishments in that city and none elsewhere. The University of Manitoba School of Architecture shows Howard C Stone as the architect of record for the Walker theatre and I believe he should be listed as such at the top of this page.

Triggerfinger bassplayer Paul van Bruystegem once labeled a concert as “An ode to Burton Cummings and his vintage theater” and commented “This was straight from Belgium to you, Mr. Cummings; local singer-musician-hero”. The Belgians played as a support act for the Canadian rock band Big Sugar in 2015. More about this theater can be found in the book “Monsieur Paul on Tour” (2016).