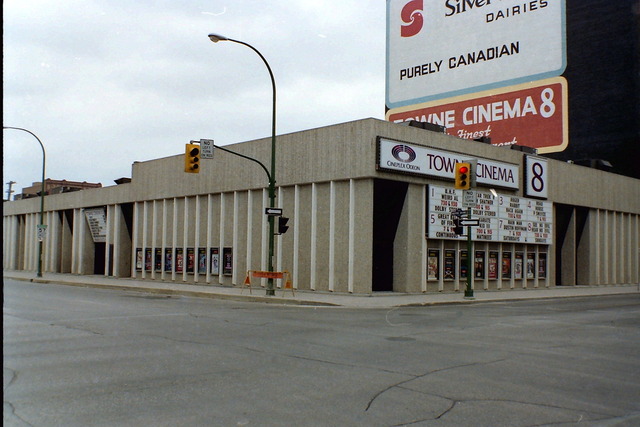 “Landmark Cinema’s Towne Cinema 8 located at 301 Notre Dame Avenue in Winnipeg opens on August 21, 1981. First manager is Dave Pilcher. Canada’s first eight-plex under one free-standing roof has roughly 1,800 seats. Boasting the finest in sound and motion picture projection, and equipped with Dolby Stereo and 70MM. Opening features were "Blazing Saddles”, “Rockshow”, “The Four Seasons”, “Stay As You Are”, “This is Elvis”, “Breaker Morant”, “Just a Gigolo” and “Lunch Wagon”. Ownership changed to Cineplex Odeon on March 1, 1985. Closed on February 26, 1995. Re-opened by Landmark Cinemas on April 14, 1995. Re-opening features were “The Wild Bunch”, “Pebble and the Penguin”, “Outbreak”, “Disclosure”, “Dumb and Dumber”, “Billy Madison”, “Drop Zone”, “Legends of the Fall” and “The Quick and the Dead”. Theatre is still open and showing movies."