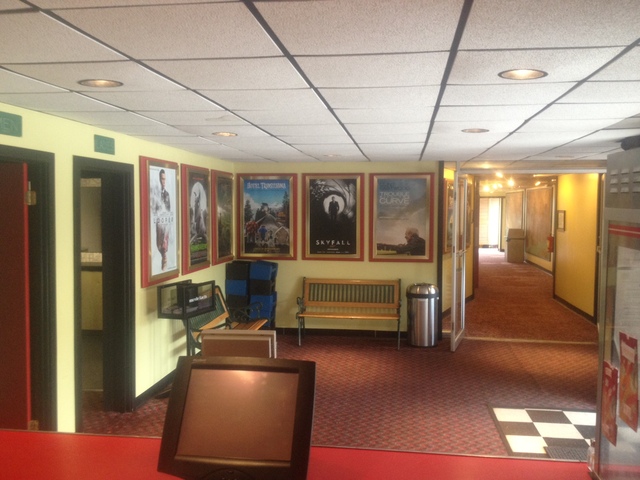 Originally built as a livery stable, then a garage, the Fine Arts Theatre opened in June 1949. This charming, independently owned triplex has managed to remain in business for decades despite the competition of nearby megaplexes. The first time I visited the Fine Arts Theatre was in the 1970’s when the theatre primarily exhibited foreign and independent films (I saw “Cousin Cousine” there).

The theatre showed mainstream first run fare. The main auditorium features Asian-style artwork on the walls. The other two auditoriums, which I presume were built at a later date, are small and nondescript. It was closed for renovation in 2013, and money is being raised to install digital projection. It was reopened in the Fall of 2014.

Hi, Ron. Thanks for posting the interesting preview of the book about Maynard, Ma, and for the heads-up about when the Fine Arts Theatre first opened.

An advertisement for both the Peoples and Fine Arts theatres is on page 92 of this book:

The FIne Arts advertised itself as ‘Showing Quality American, English and Foreign Films.’ The movies advertised for the “Week of December 31” are Madeleine and Rocking Horse Winner, both ‘English Made’. Madeleine came out in 1950 so I assume this is when the ad ran. Admission was 55 cents, or 25 cents for children accompanied by adults. There are ‘Daily Broadcasts from WKOX Framingham’ but this is not otherwise explained in the ad.

Interesting info, Ron. Thanks again for the heads-up.

THEATER UP FOR SALE OR LEASE.

The Fine Arts in only closed for renovation. The old web site that says it’s closed is for the former tenant. The new owners web site is http://fineartstheatreplace.com/ and their Facebook page is https://www.facebook.com/FineArtsTheatrePlace

The Maynard Fine Arts Theater is open after renovation. Two screens are operating with the third promised to be operating soon. The new owners are still raising money for digital equipment. But being a film theater they were able to open Interstellar two days before the multiplexes, thanks to Christopher Nolan’s love of film.

An update with sad news but with some hope for the future, Fine Arts Theatre Place was doing well after it reopening in 2014. Covid cause a shutdown and then a limited reopening with spaced seating. Just as things were getting more normal Steve Trumble, the owner who oversaw the renovation and really save the theatre, unexpectedly died in March 2021 and the theatre has been closed. As of the beginning of this year there are new owners who hope to open the theatre soon.