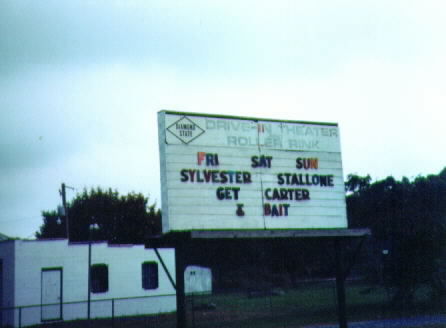 Filmed this around late december of 2012. Screen still looked great. Roller rink is shot! Projection room is still there as are the bench seats aside of it. the concession stand was in horrible shape. Talked to the grand Daughter of the owner the day after Christmas and she said they took it off the market and never had anyone intrested in the property. If you look in local paper’s at the time of closing it sounded like a war between them and the renter’s. She said that the people who leased the property stole her Grandfather’s original sign and took other things as well. But the leasor was the one who fixed up the property. ie his stuff! No projectors , but the power units were there. Also found tickets 4 years later in the feild laying in the grass. have some in my house now. It would take little effort to open this again. But money and time and dealing with the owners are again a challenge.

Anybody know if this land is still for sale? Or who to contact? I’ve driven by it recently and it looks in the same state of disrepair. No visible for-sale-call sign from what I could see.

With new tools available (particularly crowdfunding) I’m thinking it wouldn’t be completely impossible to open this place again, but I need someone or something to start with. Any info would be appreciated!

So disapointed they never did anything with this. the origional owners mr. & mrs. steel would not be happy everything they worked for is gone! My mother worked here until the day she died. I have so many childhood memories here & so many memories of my mother. She was so dedicated to the drive inn she worked their for free every weekend just to help out patty Dave and donnie the leasers which by the was are the ones who did all the work restoring the drive inn when it opened back up. Mr. & Mrs. steel loved and trusted them i highly doubt they would steel any signs or whatever u say! They were so deticated to keeping the drive inn going! If i had the money i would open it back up in my mothers memory. when she passed i thought what would my mother want to be after death & the only place i could think of where she enjoyed her life and loved being was the diamond state drive inn so i spread a part of her their and every summer i go their and just sit and remember! Id give anything to have this up and running again.

Dave Lounder THE DRIVE-IN THEATRE PRESERVATION SOCIETY TheDriveInGuys.com on June 24, 2013 at 12:55 am

As far as I know, the marquee was intact when Brown re-opened the Drive-In. Yes, it appears that he did in fact take the sign with him! Brown moved on to the Greenview Drive-In in NY, renting and re-opening for just 2009. He is now operating the Skowhegan Drive-In in Maine, where he has engaged in what is called ‘aggressive panhandling.’ He is playing upon the heart strings of locals, begging for money donations to his for-profit theatre (which he purchased?) to buy digital projection equipment, claiming that the drive-in will close forever if the money is not raised. I was a partner with Brown when we re-opened the Motor-In Theatre in Sutton, MA in 1996. I wish I could find something nice to say about his business ethics.

4/18/15 land still for sale – just think of all that money they could have made if they kept leasing the property as a Drive-In Theater. They could have put a clause in the lease that if it sold that the lease was finished. They would have had a monthly check coming in anyways and Delaware would still have a drive in theater.

August 12, 1949 was opening night. The Diamond State Roller Rink opened in 1954 adding to the entertainment on the property.

From about the mid 1960’s until at least the mid 1970’s the Diamond State was leased to R/C Theatres (Roth/Cohen) from the Baltimore/Washington area. Under R/C banner the Diamond State played nothing but low rent ‘Drive-In’ oriented fare such as “Caged Women” “Macon County Line” “Last House On the Left” and other similar Corman New World Pictures/AIP motorcyle and exploitation fare.

the projectonists booth is gone. the concession stand looks like it could fall over at any minute. the marquee and screen apear to be in great shape. though the projectors booth location is easy to identify as the removed the speaker poles and installed them in the shaspe of the old projectors booth!

Opened with “Under California skies” and “Campus honeymoon”. Closed With “Bolt” and “Madagascar 2 escape to Africa”. Also had a roller rink(ice or roller?) building on site(still standing, possibly also closed?).