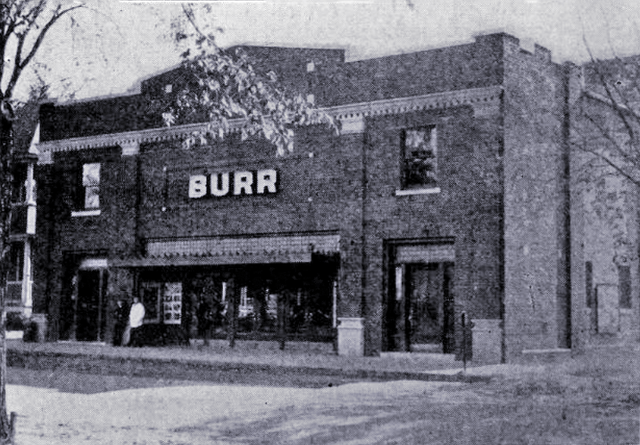 Locally owned by Frank Burr. Opened September 19, 1927 and operated until 1967. Building still stands with seating removed. Presently being used as storage for a lumber yard.

That explains it! Since having to take the detour from Indian Orchard back to 21 I happened to see this obvious cookie cutter design of neighborhood movie houses that sprung up in the late 1920’s. I believe I discovered it while at a stop sign and happened to look to the left. My curosity has been satisfied. Correct me if I am wrong, but didn’t I see a stage house above the auditorium? Unusual for the movie houses of that time. Live stage shows?

There is a MGM Theatre Photograph and Report card for the Burr Theatre in Ludlow. There is a photo of the facade taken in April 1941. My copy is of very poor quality. There is a rather nice brick facade which features a small, brightly-lit triangular marquee. Attractions are “Let’s Make Music” and “Slightly Tempted”. To the left of the entrance is Florence’s Sweet Shop. The Report states that the address is “24 Hubbard St.” It says that the Burr has been a MGM customer for 10 years; that it was built about 1930; that it;s in Good condition; and has 700 seats, apparently all on one floor. There is a competing theatre in Indian Orchard and the 1940 population of Ludlow was 8,181.

In the 1942-43 Motion Picture Almanac, the Burr in Ludlow is listed under the Rapalus Theatres, which was run by Joseph Rapalus of the Majestic Theatre in Easthampton, MA. At the time, there were 5 theatres in the Rapalus circuit.

Jumping ahead twenty years, the 1963 almanac list four Rapalus theaters. Joe Rapalus was still the GM and film buyer. The theaters were the Burr, the Capitol in Monson, the Bijou in Holyoke and the Majestic in Easthampton. I guess Rapalus lost one theater over the two decades, which isn’t a bad attrition rate.

Do you remember Tootsie, the cross eyed guy who patrolled the inside of the theater and would throw us out if we were noisy?

My great grandmother owned Florence’s Sweet Shop next to the Burr theatre. I was hoping someone would have a picture or memory of her shop.

susanbevere- The entrance and sign for Florence’s Sweet Shop can be seen in a black & white photo taken in April 1941 of the Burr Theatre for the MGM Theatre Report project. It’s in the archive of the Theatre Historical Society in Elmhurst IL. historictheatres.org. They can make a copy for you, but it’s expensive! It’s MGM Theatre Report Card # 182. If you can’t find a less expensive photo anywhere else, you can go to their website and send them a message. I have an old Xerox copy of the report, but the photo copied very poorly.

I can’t thank you enough Ron that’s wonderful I can’t wait to see it!!!