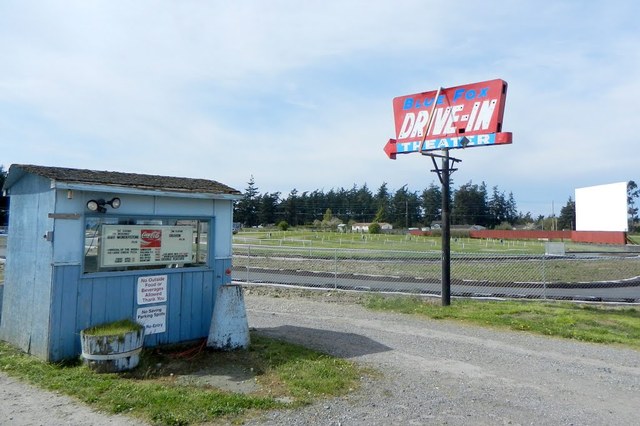 The Blue Fox Drive-In opened in 1959 with Pat Boone in “April Love”. It has a capacity for 280 cars. This drive-in remains open today.

Here is an interesting photo:
http://tinyurl.com/yb3pros

The Blue Fox is the first Washington drive-in to open with digital projection. A fantastic picture on screen. I like the new pre-show, they will add some variety in the next few months. My last 2 trips here have been in late winter. I’ve been happily surprised to see the turnout in such cold conditions.

An old obituary in the Whidbey News-Times says the Blue Fox was built and owned by Woodrow “Woody” Cecil and his wife Charlotte. Another article said Woody “partnered with George Dickson” to build it.

A 2006 article there said Darrell and Lori Bratt purchased the theater in 1988. In 1990, it switched to FM sound. The screen went down in a 1998 windstorm, but obviously they fixed that.

There’s a superb drone video of the place on YouTube.

Is there actually an animal called blue fox?

The Blue Fox Drive-In got their named from the recently closed Blue Fox Drive-In Restaurant. The neon sign was available, so they took it.
These days, there is a Blue Fox mascot at the drive-in that shows up around town for parades and stuff.

“The reason it’s called the Blue Fox, from what I understand from the original owner, was when he built the place in ’59 he didn’t have a name for it,” Bratt recalled. “He contacted a sign company to build a sign for him. The maker of the sign says, ‘I’ve got a deal for you if you’re not picky on your name.’ He had a sign that was the Blue Fox Drive-In, you know the old drive-in restaurants. He goes, ‘It’s a repossessed sign, so if you call it that I can make you a heck of a deal on a sign!’ That’s how it got the name of the Blue Fox drive-in.”

This theater is very well maintained and a super fun place to go. Food is excellent too.

The theater was finally allowed to reopen under Governor Inslee’s “Phase 2” coronavirus guidelines. This means only 50% capacity of cars, snack bar is takeout only, bathroom restrictions in place, and the gameroom arcade is closed.