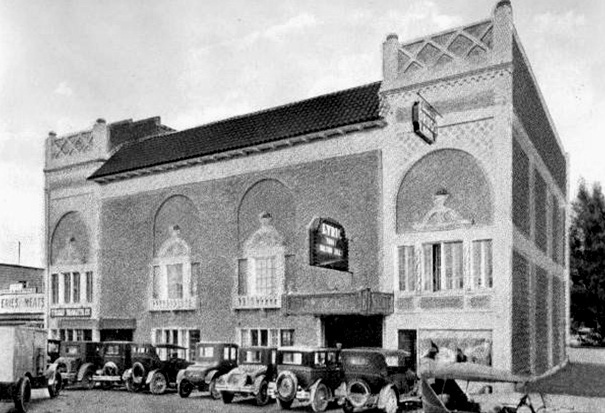 The Lyric Theatre was opened in 1926. By 1953 it was operated by the Talgar Theatre Company chain.

Two years ago I saw Tony Orlando at the Lyric!

THE HISTORY OF THE LYRIC THEATRE
The LYRIC THEATRE was built in 1925 as a silent movie house and was operated until the depression when it was closed and eventually sold. Over the next 50 years it was bought and sold to various concerns and used in a variety of manners. In 1978 the theatre was purchased by a non-denominational church and was used for their weekly services until they built a new facility, and no longer needed the structure in downtown Stuart.

At that time, in 1987, a downtown redevelopment effort was underway. A group of community minded individuals saw the LYRIC THEATRE, situated in the heart of downtown, and realized there was an opportunity to save a historically significant structure, thus contributing to the redevelopment effort, as well as to provide a much needed location for various types of events presented to the community.

Since 1987, the LYRIC THEATRE has hosted a variety of events, ranging from classical theatre to rock and country bands, orchestra and jazz concerts, dance recital and school programs, as well as movies. It has also hosted charity fund raisers, civic presentations, and individuals who rent the facility.

The LYRIC THEATRE seats 500 and has a 22'X30' stage and features whisper-perfect acoustics. It has a balcony, spacious lobby and entrances on two downtown streets. As of October 1997, over $1.5 million in state and local dollars have provided exciting enhancements to the historic theatre, including structural repairs new air conditioning, remodeled and improved backstage and dressing areas, new restrooms and office space.

The LYRIC THEATRE has been named to the National Register of Historic Places. This grand old theatre represents a colorful history in our community as a central gathering place for young and old alike.

Thanks to our supporters and grants from the State of Florida, the preservation of your LYRIC THEATRE continues for the cultural benefit of the Treasure Coast!

The Lyric Theatre has recently undergone extensive expansion of its facilities, to keep it state-of-the-art, and bring in the size and quality of productions our audiences have come to expect.

This 500-seat jewel box theater has undergone a structural renaissance in recent years, to restore and enhance its spaces for performers and audiences alike. Improvements include: an enlarged stage, remodeled and expanded backstage and dressing areas, new office space and an elevator to improve access to the upper level.

With these enhancements and your continued support, the “New Lyric” will be bringing you top-flight entertainment for years to come!

Is the organ still there? When I lived in South FL I went to to the Lyric and saw Tony Orlando, but I don’t recall seeing any organ.

Friday’s New York Times Weekend Section did a piece on Stuart and the Lyric was mentioned many times including the year it was built, the manager’s name and how many seats.

LM: Great photos! Does make me recall when I went to this theate during my life in the Sunshine State. And I do wonder if the Lyric Theatre Robert-Morton organ was white?