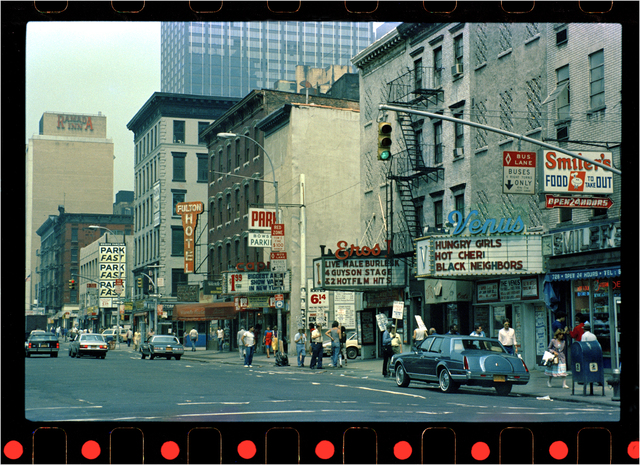 It was a conversion of former retail space, and opened in 1969. It operated under several names over the years.

We had an Eros Theater in Jacksonville back in the 70’s.Never went in there,it was just a little hole inthe wall peepshow place.Doeas anyone have any pictures of the old peepshow machines,the 8mm or 16mm variety from the 70’s?

Here’s that same 1991 screengrab from Hollywood90038’s video footage – now that his link no longer works. Thanks for the permission, H.

BTW, that’s the Capri Theatre’s marquee that can be glimpsed in the foreground of the image above. The Venus Theater is just barely visible behind the Eros. All three were opened between 1968-1969 by Chelly Wilson – who also ran the Cameo and Adonis Theatres on the other side of Eighth Avenue.

This was another Times Square place in the early 70s. Not listed on CT, as far as I could tell.
http://tinyurl.com/o2up25

The bar is now called the Playwright Celtic Pub.

Mrs. Chelly Wilson owned the Adonis and every other gay movie theater in the 1970s in NYC.

I was in charge of distributing J Brian films, who was the hottest
gay film maker at the time, and talked to Chelly several times.

She was coarse, almost rude, and proved to be a thief, a liar and a cheat at every turn.

The last film we sent her was “Raw Country” contracted for $10,000
and she managed to convince the UPS driver the correct amount was
$1,000 for this small package (2 reels of film) and he gave her the film and took the check.

hey ken- thats me in the gray camouflage shirt taking the sign down. the wilson sister sold it to me when they closed.