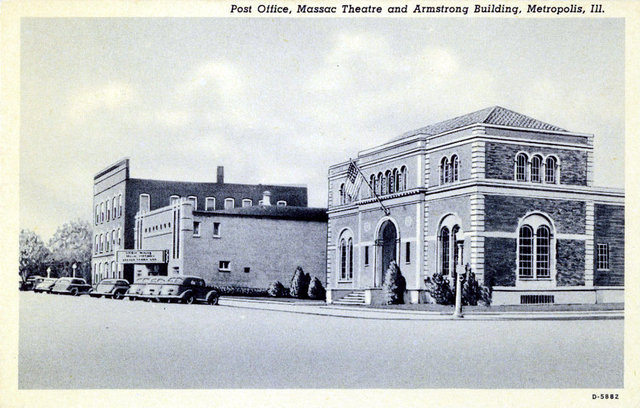 The Massac Theatre, located in downtown Metropolis, has been closed for years. Further information on this Moderne style theater would be appreciated.

According to a report in Boxoffice of July 23, 1938, the general contractor for the Massac Theatre, Ed Barenfanger of Salem, Illinois, expected that the theater could be opened by late August or early September. There is today a Barenfanger Construction Company operating in Vandalia, Illinois. I wonder if it could be the successor firm of Ed Barenfanger’s operation and, if so, they might have old records about the Massac project?

I’ve been unable to find any mention in Boxoffice of the name of the architect of the Massac, but this web log post by Michael R. Allen, about the Merry Widow Theatre in St. Louis, points out the similarity between that house and the Massac, pictured in this web log post about the latter theater by the same author. Could the 1938 Massac have been designed by St. Louis architect Jack Shawcross, who designed the New Merry Widow a few years later?

The Massac Theater made the Landmarks Illinois 10 Most Endangered Historic Places List:
www.landmarks.org/ten_most_2010_e.htm

A story about the efforts to restore this theater: View link

From Metropolis an undated postcard view of the Massac Theatre.

The URLs have been changed for the weblog posts by Michael Allen that I linked to in my previous comment:

Post about the New Merry Widow Theatre in St. Louis.

I’m still trying to track down any confirmation of the surmise that Jack Shawcross was the architect of the Massac Theatre, but so far no luck.

Hi I am a member of a Facebook group dedicated to saving the Massac Theater. We are trying to raise money to save the theater and bring it back to its former glory. The theater is in Metropolis, Il which is the official home of Superman. There is an official Superman Celebration the second weekend in June every year. Our goal is to try and raise enough money to have the theater renovated and open for the premier of the new Superman movie which is premiering on June 14, 2013. Please feel free to visit and “like” our page. Wee need all the help we can get. Thanks.

The Theatre had 542 seats on the main floor and 185 seats in the balcony. It also had a stage as well as the movie screen and hosted bluegrass bands, radio station grand openings, different traveling acts and even a cooking show.

They were very proud of the seats and the air conditioning system. Both were state of the art.

The theatre is Being restored By is new Owner

The correct spelling of the name of the architect of the Massac Theatre is Oliver W. Stiegemeyer, which is the way it is spelled in the 1956 and 1962 editions of the AIA’s American Architects Directory.

I shot some photographs of the Massac Theater while on a road trip through Southern Illinois this past Summer. Here’s a link to the first one in my Flickr photostream.