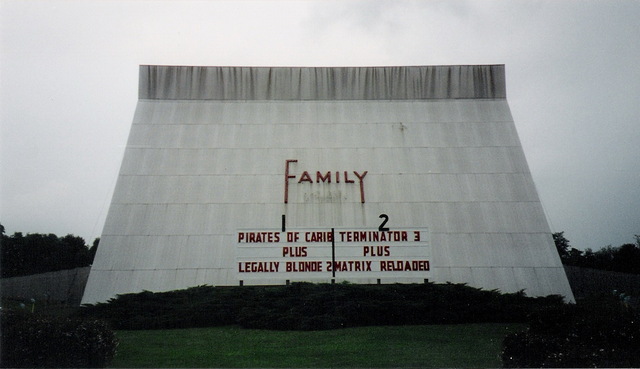 In 2010, it was leased from the Dalke family by the Colonial Entertainment Group, LLC., who also own the Raleigh Road Outdoor Theatre in Henderson, NC.

In 1970 this drive-in was part of Dalke’s Valley Theaters, a Woodstock, VA operation.

I think it’s still in the Dalke family, although they have sold or closed all their other theatres, including ones in Woodstock, Strasburg, New Market and other area towns.

I had such a great time visiting the Family Drive-in! My best friend moved to VA a few years ago and we went on one of my visits.

You can see some photos on my blog post – they still use the car speakers!! :)

The Family Drive-In has made the conversion to digital projection and sound.

A lot of news outlets got confused about the Family’s ownership structure. I guess the Wikipedia entry wasn’t around yet.

From The Washington Post, July 26, 2013: “William Dalke Jr. built the Family Drive-in Theatre outside Winchester in 1956 in the midst of an American drive-in building boom. … in time (son Tim) Dalke took over the Family Drive-In. ‘I twinned the screen in 1989 because we could double the product we were offering the public,’ he says. … (Dalke) says that Jim Kopp will be his first option if he ever wants to sell the park”.

From WTOP, August 2012: “owner Jim Kopp … took over the theater three years ago.”

From the Drive-In Theater Adventures blog, August 2013: “In March 2009, Tim Dalke leased the theatre to Jim Kopp (the lease runs for another 7 years).”

The Voice of America produced a video about the Family Drive-In in July 2013. It’s available at the Internet Archive, and it’s in the public domain.