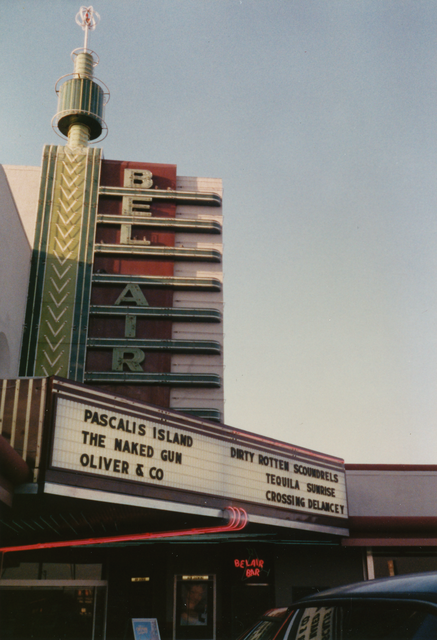 Located in a two-level shopping center at the corner of Bellaire Boulevard and Stella Link, this was a wonderful neighborhood theatre that used to feature Saturday morning kid programs with local personality Don Mahoney. The interior boasted murals by local artist Nione Carlson, who also designed the marquee. The first floor seated 800, while the balcony sat 400.

Originally a first run house when it opened on April 16, 1949 with Fred Astaire in “Easter Parade”. It unfortunately began to lose business to multiplexes, became a second run house house, being sub-divided into 5 screens from November 26, 1986 and finally closed on August 2, 1992 after a long battle to preserve it.

From the mid-1990’s, it has housed a Discovery Zone and retail.

I recently purchased a Civil War Confederate Flag with the words “Bellaire Theatre” stamped several times along the white edge where the grommets are. Does anyone remember seeing this flag on display at the theatre??? I’m thinking it was from the centennial celebration from 1961 to 65.

I worked as an usher at the Bellaire in 1958/59. The owner was Brig. General Victor A. Barracco. He was a retired Marine Corps General who ran the theater like the Corps. His language could curl your hair. My mother did not want me to work there. He told me I was the stupidest person he had ever known. (I doubt that.)His assistant was Millie Vann, who had worked with him in the Marine Corps. His wife was a doctor who drove nice cars. Ushers made $.50 an hour. We had to change the marquee by climbing a dangerous ladder. There were metal stands at each bus stop in front of the theater and we had to paste one sheets on them for every show. There were usually several layers of sheets on the board and we had to mix up the paste ourselves. It was messy. Ushers wore uniforms that were kept in a room above the store room. They were never laundered. Drinks from the consession stand were mixed from gallon bottles of syrup that we had to bring down the store room stairs. Wayne Mattison dropped one and it broke. Our shoes would stick to the floor for years afterwards. General Barracco died well into his 90’s. Millie Vann lived a long time also. I could go on and on.

I was an usher there about 1961…still at 50cents an hour. I remember the ladder and that Barracco would make us pay for any letter we dropped and broke when changing the marquis…so the room was covered in broken letters! I enjoyed watching him in the ticket booth as he got so crocked he’d put the lit end of his cigarette in his mouth. But it was a job!

The picture above is most likely from 1988, when those movies debuted. Several friends and acquaintances would pile into a VW Bug and drive all the way from Lake Jackson to watch the Rocky Horror Picture Show on Saturday nights. This was from about 1989 through ‘91. There were many sexy and exciting people in attendance, among the audience and performers down front. Those were such halcyon times for me, especially when it came time for the virgin auction. A virgin was someone who had not seen the theater presentation; it was funny seeing the virgins squirm before the shows, as they were bid upon, sometimes just for a condom or similar pittance. If you won the bid, then the virgin would have to sit with you. I must say that I met a number of people, some of whom became more than just friends. Nothing quite like this exists now.

How was the interior reconfigured when the auditorium when from having one screen to five?
Does anyone have any interior shots of the theater?

The Bellaire represents the spectrum of movie exhibition from Post-War to the Video Era as well as any Houston theatre. Built as a neighborhood house during the Post-War theatre boom, the theatre launched April 16, 1949 with “Easter Parade” the day prior to Easter.

The theatre struggled in the 1970s with the theatre experimented with martial arts films and Indian films and then live stage shows. In 1976, the theatre became an X-rated cinema on a ten-year lease by Tercar Theatres.

In 1986, Metro Cinema took on the property and hired Architexas, a historic preservation architectural specialist in Dallas who had done a similar job at the Inwood Theatre there, to create a five-screen theatre with car. The new art house launched November 26, 1986. But when that failed, the theatre went back to sub-run discount feature films. “The Rocky Horror Picture Show” was a rare bright spot for the theatre. Its lease was ended at the terminus of a five-year period on December 1, 1991. A campaign brought the theatre back with no success closing for good August 2, 1992.

The theatre was repurposed for other retail ventures including a Discovery Zone party venue and grocery stores. Because of its conversion, it is in no danger of being razed.

Used to go here for ‘Rocky Horror’. Feel so stupid for never having taken any pictures.