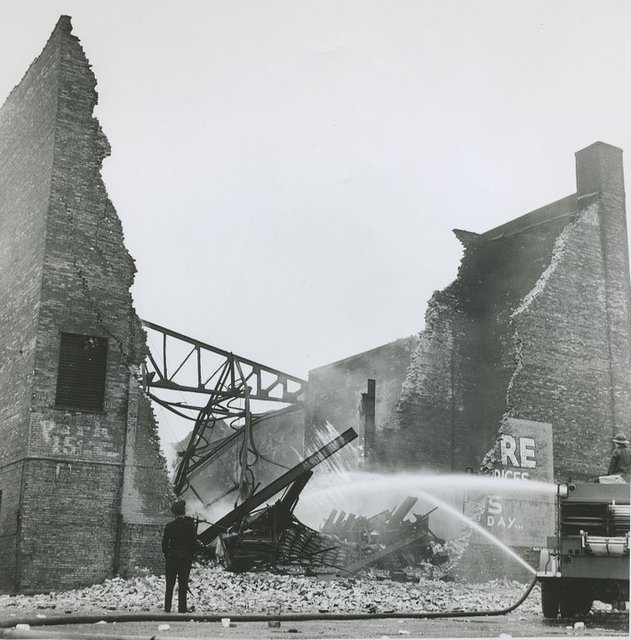 The Oakland Theatre opened on March 27, 1917. It had an ‘amphitheatre’ style (stadium) seating arrangement, with no official balcony. This theatre burned down in late-October 1960.

Sloppy reporting by the paper as they call the theater “Oakwood” in this story dated 10/27/60:

PONTIAC (UPI)â€"Fire destroyed the Oakwood Theater here Wednesday night and threatened an entire business block before it was brought under control. Several stores and professional offices next to the movie house were also demolished. Damage was estimated by Fire Chief James White at $300,000 to $500,000. Firemen from Pontiac, Waterford Township, Royal Oak, Birmingham and Ferndale battled the flames which shot 75 feet into the air and could be seen for miles. All 60 patrons of the theater were evacuated safely, but two firemen suffered minor injuries battling the blaze.

An estimated 4,000 spectators jammed the area although all streets leading to the downtown section were blocked off to prevent traffic congestion. A preliminary study showed the fire started from a short circuit n the projection booth, but further investigation disclosed it started in an adjoining drug store, of unknown causes.

The Oakland Theatre in Pontiac is on a list of theaters designed by C. Howard Crane as project #247. Plans for the Oakland Theatre were announced in the June 3, 1916, issue of Michigan Manufacturer and Financial Record, which said that construction was underway. The article described the seating arrangement of the house as being “amphitheater” style. The Oakland was one of several Crane-designed houses from the 1910s which featured this type of seating.

The July 8, 1916, issue of The Moving Picture World said that the Oakland Theatre had been designed in the “Adams” style of architecture, and said that the project was being rushed to completion, and the theater was expected to be open by early October. The rush was apparently in vain, as an item in the April 16, 1918, issue of Michigan Film Review said that the Oakland had been in operation for one year as of March 27, which would give an opening date of March 27, 1917.