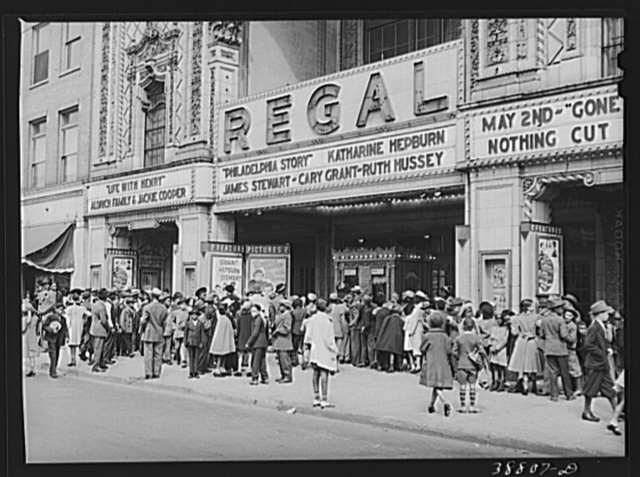 The Regal Theater, which opened in 1928 as part of a huge real estate development in the heart of Chicago’s historic Bronzeville neighborhood, was built as the flagship of the Lubliner & Trinz circuit.

Designed by architect Edward E. Eichenbaum of the architectural firm of Levy & Klein, who earlier had produced the Diversey Theater (later renamed the Century Theater) on the North Side and the Marbro Theater on the West Side, the Regal Theater would outshine both of their earlier creations in its opulence. Built in an Atmospheric style inside, with a blend of Moorish, Spanish and Far Eastern motifs, its highlight was the amazing auditorium, which sat nearly 3,000 on leather-clad seats.

The ceiling of the auditorium was designed to look like a huge canopy supported on the side walls with poles gilded in gold and offering peeks of a vauguely Middle-Eastern landscape between the poles. In the center of the polychrome canopy was a hole with a view of a deep blue sky with clouds and stars. The large proscenium arch around the stage was created to look like an Oriental temple, decked in gold, blue and maroon. The Regal Theater was also equipped with a state-of-the-art ventilation system, dressing rooms, an orchestra pit, and a Wurlitzer organ which could be hydraulically raised or lowered.

The same block which contained the Regal Theater also included the legendary Savoy Ballroom, which was the South Side “sister” of the Aragon Ballroom on the North Side, two of Chicago’s most glamorous ballrooms. (Only the Aragon survives today, as a rock concert venue). The Regal Theater and Savoy Ballroom together made this stretch of South Parkway in Bronzeville popularly known as the Harlem of Chicago for its important cultural and social contribution to the African-American community in Chicago.

The Regal Theater was also unusual for its hiring practices when it first opened. Lubliner & Trinz staffed its flagship palace with mostly African-American management, ushers, house musicians, cashiers and attendants. Most other major Chicago theaters at the time would only hire African-Americans for janitorial and behind-the-scenes jobs. Those who would appear on the Regal’s stage over the years read like a who’s-who list of America’s greatest African-American entertainers: Count Basie, Duke Ellington, Louis Armstrong, Billie Holiday, Lena Horne, Ella Fitzgerald, Aretha Franklin and many others. It is said that Nat King Cole, a Bronzeville native, got his start at one of the Regal’s popular Amateur Night contests.

Although business boomed at the Regal Theater for its first couple years, during the Depression, attendance began to slip. Balaban & Katz had acquired the Lubliner & Trinz circuit in the early-1930’s, and as part of a massive cost reduction plan, decided to shut down the Regal Theater. However, due to a strong outcry of alarm from Chicago’s African-American community, the chain opted to leave the Regal Theater open.

By the late-1930’s, the Regal Theater was as popular as ever. Its hugely popular stage revues would continue, in addition to motion pictures, right up until the time the theater closed.

Despite modernizations by Balaban & Katz over the years, the Regal Theater of old was no more, and finally closed in 1968. In 1971, the Regal Theater was partially gutted by a suspicious fire, and though heavily damaged, still could have been saved. Instead, it was left to fall into ruin and demolished two years later.

A performing arts center originally to be named for Lou Rawls, who grew up in the neighborhood, was begun in 1993 close to the site of the Regal Theater, but work on the project stopped and started several times, until it finally opened in late-August 2004, now called the Harold Washington Cultural Center, after Chicago’s first African-American Mayor (1983-87), a champion for education and culture.

Saw so many great acts there. I used to sit on the stairs at our 48th street building and watch the limos with the stars in them drive by and down the alley. The Regal will live in my heart forever.

Who would have thought the fabulous Regal Theater would be closed. There needs to be a move to reopen the theater, showing old black and white movies, with talent shows every saturday and sunday. Lets get this thing started call it the Regal Theater Ressurection.

When you think about the Regal and that it was built in the Black community for its Black people way back then you realize it can be done again.When I was a little girl my mom took me to the REGAL every week. there were new acts every week. I remember seeing Nat King Cole and his trio, the Step Brothers,Josephine Baker,James Brown, Diana Washington, Ella Fitzgerald,even Sarah Vaugh, people who you only see in magazines now a days…

This comment affects to entries (THE MET & THE REGAL). Chicago has an address scheme that causes EVEN numbers to appear on the WEST and NORTH, while ODD numbers appear on the EAST and SOUTH.. The Regal is on the EAST side of King Drive, therefore 4719. The MET was across the street therefore it would have been something like 4744 …

The digits 0 and 1 of the address were reversed. It should be 4701 King Drive, the address of the Harold Washington Center. I think the Regal was the last theater in Chicago to have stage shows. After the Chicago ended live shows, that left only the Regal and Tivoli. My favorite memory of the Regal was a show featuring Dinah Washington. At the end of her set, she brought out her latest male interest, a young man barely legal, if that. The audience just went wild with applause and cheering.

You may be on to something. Below is a 1947 Wayne Miller photo, that reads “Looking North on South Parkway at 47th. And pictured is a theater that is clearly not the Regal. Looking North would put the even numbers on the left/West side of the street in that photo.

However all other sources claim the Regal address as 4710, including books referencing the architects Levy & Klein. And the original Lou Rawls theater project that fell through mentioned in the Overview at the top, was only referred to as being “close to the site of the Regal Theater”. Not necessarily on it. The Harold Washington Cultural Center Wikipedia page, seems to be the only source that claims it is in the same site as the Regal stood. And Wikipedia should never be trusted to be accurate. (They list the Century/Diversey Theatre at the 4710 address too. On Levy & Klein’s page.)

Below is the Wayne Miller photo I referenced.