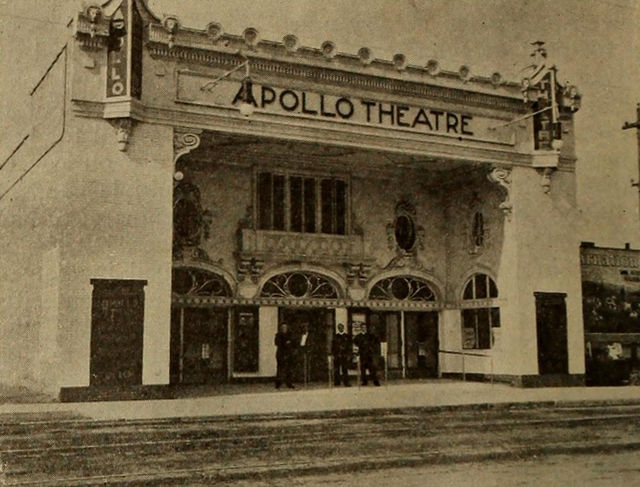 The Apollo Theatre opened in 1909 on 47th Street, in the Grand Boulevard neighborhood, close to the 47th Street/South Parkway (now Martin Luther King, Jr. Drive) commercial/entertainment center. Originally a vaudeville hall seating over 700, the Apollo served what was at that time a solidly Irish and Jewish-German neighborhood.

During the 1920’s, African-Americans poured into the neighborhood from the South, and within a few years, the area around 47th Street and South Parkway later gained the nickname, “The Harlem of Chicago” for its many African-American cultural and entertainment institutions, such as the Regal Theatre, the Savoy Ballroom, the Palm Tavern, and the Metropolitan (Met) Theatre. (Sadly, of all these great venues, only the Palm Tavern still stands today).

In 1920, the Apollo Theatre was renamed the Earl Theatre, and switched to a movies-only format, and continued to operate in this capacity until it closed in the 1950’s. The theater’s name reverted back to Apollo Theatre by the 1940’s. The theater building remained standing, having last housed a medical center. It was demolished in January 2012.

Here is a map from the 1920s that shows the Apollo and the other theaters in the area:
http://tinyurl.com/26lsrt

Trying to place this building, if in fact it was a theater. Thanks.
http://tinyurl.com/d62rot

I remember the Apollo on north Pulaski/Crawford was a High-LO grocery store in the early 1050s… Can anyone verify this ?