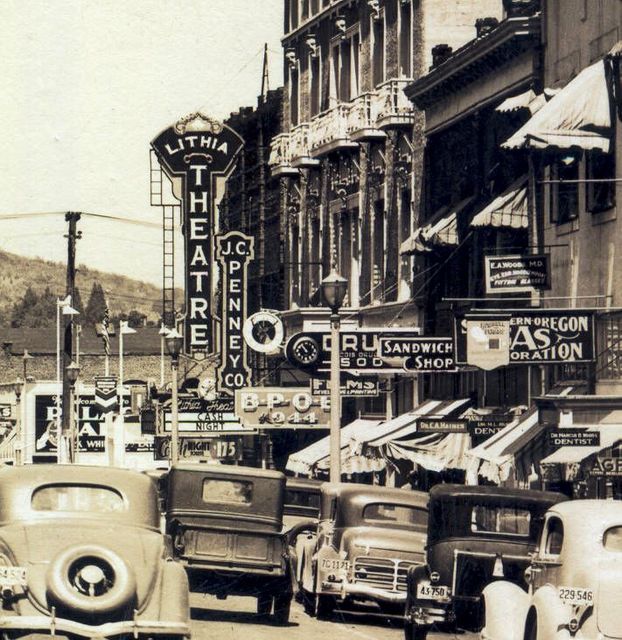 The Vining Theater opened May 7, 1914, named after its owners, Irving E. and Robert L. Vining. Opening night of the Vining Theater was a glittering occasion. The “beautiful little theater”, as it was described, with its brick and cement exterior, cost $35,000 and had a seating capacity of 570. The ornate, chandeliered interior comprised orchestral stalls and balcony, with five boxes (each with six seats) on either side of the stage. Centered at the back of the balcony was the projection box for the photoplays (then, the word for movies).

Comfort and convenience were the hallmarks of the retiring room for the ladies and smoking room for gentlemen. The theater was said to be entirely fireproof, the five exits by builder A.D. Helms, the well-known orchard owner and capitalist, assuring the emptying of the theater in two minutes.

The Vining Theatre was considered a “combination house” because it offered movies, vaudeville, touring and stock shows, and local amateur entertainment through the 1920’s. In January 1921, its facilities were enhanced by the installation of a 2/4 Style 75 Robert Morton organ at a cost of $15,000. This attracted a packed house at the first performance, with hundreds being turned away.

Here are two photos from 1949. One is of the Lithia, and the other is the Varsity, which was another theater in Ashland:

You can see a black and white photo of the Lithia back in 1949 here.
(http://content.cdlib.org/ark:/13030/tf1t1nb0bh/?query=oregon&brand=calisphere)

A photo postcard view of the Vining Theatre in Ashland before it became the Lithia.

“CASH NIGHT” on the marquee,Giving out money to see a movie.

The Lithia Theatre was operated by Robert Lippert from 1946 until 1951, when it closed as a movie house. It was then refurbished by Angus Bowmer and reopened as a home for his theater group, the Vining Repertory Company. In November, 1952, the Lithia Theatre was destroyed by a fire, prematurely ending the company’s second season.

Here is a 1914 photo of the Vining Theatre’s auditorium.

Here is a 1951 photo with the posters of the Vining Repertory Company’s four productions for that season.