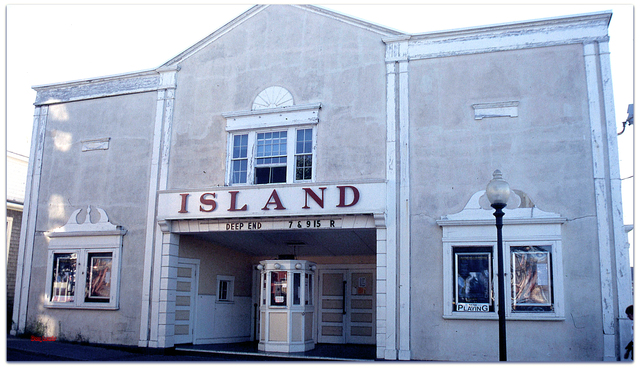 The Castle Theatre was opened by 1915. By 1922 it had been renamed Eagle Theatre. By 1941 it had been renamed Island Theatre when it was operated by Strand Theaters out of Boston, MA. When I spotted and photographed the Island Theater in September 2001, it was open and showing movies. It was white stucco, with a classic stand alone ticket booth sheltered in the main entrance to the building with double, glass front movie poster displays on each side of the entrance. “Island” was displayed in large cut out letters over the entrance, under a large set of windows. The Island Theatre was closed in 2010.

Here is a nice exterior view of the Island at: www.preservationdirectory.com/photodatabase_theaters.html

The Island continues to be open with first run fare primarily during the summertime and some winter holidays. 508-627-6689 gives the latest film information.

My photograph of the ISLAND View link

Was there yesterday the theater closed in 2010. It is boarded up and they said the inside is intact. Update status to CLOSED.

The recent history of the Island Theatre has been troubled. Twice last year the building was declared unsafe by inspectors, the second time in November when part of the ceiling collapsed following inadequate repairs that were made in response to the first citation.

According to this article in the Vinyard Gazette of March 16, 2017, the town has ordered repairs to be done, and if the theater’s owners do not make them, is debating whether to have the repairs done at public expense and file alien on the building, or simply have the theater demolished.

The building “… is estimated to be about a century old…. and has been vacant for several years.” The issue is slated to be discussed at the town meeting on April 11.

The Island stopped showing movies in 2012, not 2010, and continues to sit on Circuit Avenue in a semi-dilapidated state as of this writing in early 2018.

The exterior was repainted last summer, though the freestanding box office was removed a few years ago, but the interior is said to be in a state of decay.

This house was in operation by 1915 as the Castle Theatre, noted in that year’s Report of the Chief of the Massachusetts District Police as being in good condition and operated by John D. Baird. By 1922 it had been renamed the Eagle Theatre and was operated by local theater magnate Michael J. Keegan, who had owned an earlier movie house called the Pastime Theatre, and by 1922 had also opened the Strand Theatre.